TLDRUpFront: For several months now the InfoMullet has been tracking a wave of instability hitting countries lying south of 30 Degrees North around the world. These countries have large youth populations, systemic economic weakness, and rising distrust and disgust not just with a single regime or political party – but the entire system of governance itself. Today we review one region in this global band: Lebanon, Iraq, and Iran where a common demographic, the “new young street” has launched separate but similar sustained protest efforts. 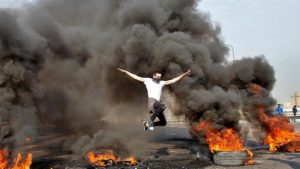 Playing with fire in Iraq.

In Lebanon protests which for for months were characterized by their non-violence, and at times celebratory atmosphere, turned abruptly violent over the last week.  The circumstances of the escalation calls back to the darkest times of the Lebanese Civil War which raged from 1975-1990. Emerging from of that civil war came a power-sharing government model that ensured each major faction had representation. The President, elected by the Parliament is required to be a Maronite. The Prime Minister, who is appointed by the President, must be a Sunni. And the Speaker of Parliament must be a Shia. Although this put a lid on violent instability it cemented a status-quo faction-based approach which is now being rejected by the protesters.

The Lebanese protests, which we’ve been covering through October and November represents a new “Young Street” sweeping the Arab and Persian Middle East. The traditional “Arab Street” represent a coalition of movements that can be identified as being aligned with an existing power faction. Even in the Arab Spring, the protesters were targeting individual dictators and their removal from power. But this “Young Street” represent different approach. Pulled from Generation Z they are rejecting not just a dictator, or a specific opposed faction, but the entire system of governance itself.  Fed up with endemic corruption, a weak economy with no jobs, and continual official incompetence these protesters are not in the control, directly or indirectly, with any traditional power broker in the various factions.

In Lebanon these Young Street protesters applied such tremendous pressure across the board that Prime Minister Saad Harid offered to resign in October, though his resignation was not accepted by President Aoun. There was even a question whether Hezbollah, the powerful non-state actor who wields influence through the Shia Speaker of Parliament would bow to protester demands. However, Hezbollah resisted calls to resign and instead is trying to form a new government.(1) All of these players are doing things the old-fashioned way – which is a game of who moves first. The power brokers agree something needs to change but doesn’t want to lose their share of power. And the resulting inaction has paralyzed the country as the economy goes into free-fall.

Last week – sensing economic collapse – banks and financial institutions began instituting daily withdrawal limits and other measures to prevent capital flights. Although not a legal policy of the government, these moves signal a loss of confidence in the country and are heavy with historical context in Lebanon where many saw their life savings as a result of similar withdrawal caps instituted during the Civil War. (2)

Protesters immediately took the banks action as proof that a new government was urgently needed and resumed protests. Some protesters attacked bank and ATM locations.  As the country began to tip over police, who had been willing to take a less-violent response to protesters, responded with unusual force. Dozens were wounded as police beat, tear-gassed and used fire hoses on protesters. On Saturday, protesters began marching on Parliament and more than 160 people were wounded in the resulting street battles between them and the police. (3)

The country is beginning to tip over as the protests take on the character of a general uprising. Gone is the celebratory mood as protesters seek to occupy Martyr’s Square at the heart of Beirut, setting up conflicts with the police.

In Iraq, the Young Street protesters who laid low during the immediate aftermath of the Soleimani strike returned last week. Contrary to state-side punditry, they do not seem to have been phased by the death of Soleimani overly and picked up largely where they left off calling for an end to the current arrangement of powerful factions within Iraq. Similar to Lebanon their concerns are aimed at not just one political power, but the entire government accusing it of mismanagement, the weak economy and corruption. The Iraqi Young Street also reject any political power that bears the fingerprints of foreigners like Soleimani and successive US administrations more than it does local marks.

A key demand of the Young Street in Iraq to reduce the power of the status quo is the disbanding of political parties and power blocs. These have dominated Iraqi factionalism since the handover of sovereign authority during the American occupation. A new election law passed in late December tried to paper over these concerns with a compromise. Carving the country into a new arrangement of districts, parties were forbidden to run formal campaigns – even if they could lend their support to ‘individuals’ running. Also left unchanged was a key part of the Iraqi Constitution that requires the formation of parties to select the Prime Minister. The new law only requires parties to lay-low during an election, but nothing changes their influence before the election or their power once their representatives are in Parliament. (4)

In response to the new law protesters are demanding a snap-election be called.  This is a live trip-wire in Iraq, as mentioned in the InfoMullet 2020 AMA Forecasts.  The current parliament tilts to existing Shia power brokers. Domestic firebrands like Muqtar al-Sadr and foreign influence through the PMF’s (which are backed by Iran) and hold many seats. It was this Arab Shia coalition that, absent the participation of Kurdish or Arab Sunni blocs, passed a non-binding resolution demanding the US withdraw troops in retaliation for the killing of Soleimani.  Protesters have done them one better, asking for complete withdrawal of all foreign presences in the country: whether US or Iran.

Also high on the list of protester demands as well is an independent Prime Minister and prosecution of officials suspected of corruption. Combined with the snap elections this is a threat to re-order the country from below, pushing up and aside the existing political parties and trying to replace them with populist reformer Iraqi’s.

The uprising in Iraq has always been violent with several hundred killed and many thousand wounded over the last four months, both at the hands of state-actor security forces and non-state actor PMF’s.  This week protesters have returned to blocking roads – setting up small pitched conflicts across cities in regions throughout the Shia dominated southern region including Nasiriya, Karbala, and Amara.  This is noteworthy because the traditional Shia bloc has always been able to turn on and off street action with a switch, protesting US occupation or working towards a Shia goal as articulated by the likes of Muqtar al-Sadr in his self-assumed role as Iraqi kingmaker.  Those switches aren’t working any more, and the Young Street is rejecting both the central and local government authorities. (5)

At the InfoMullet we were concerned on Iraq tipping over into general instability due to these protests and the excessively violent reaction. And that was before the killing of Soleimani created an opening for a fundamental reordering of power in the country. The Young Street seems determined to seize that opportunity and push through changes to free their country of foreign influence which sets up an existential crisis for the Iranian backed political parties and private militias.

Things aren’t any better in Iran, where the Persian Young Street erupted in December after the abrupt removal of gasoline subsidies sparked protests that led to the killing of thousands by the Iranian regime. If regime authorities such as Grand Ayatollah Khamenei or President Rouhani expected a rally-around-the-flag effect after the US killing of Soleimani those hopes are dashed.  The missile strike retaliation against US personnel described by the Grand Ayatollah as a “slap in the face” but it was more like tossing soggy saltines at someone. Though that may have been intended as a formal rite of agitation while signaling de-escalation, it showed the weak hand of the regime.

Mismanagement of crowd control at Soleimani’s funeral resulted in over 80 Iranian’s killed, far above the retaliation. Worse, Iranian Revolutionary Guard commanders and regime officials initially denied any role in the downing of Flight 752, which killed all 176 on board. But a repeated string of undeniable revelations have shed light to the lie of these denials. First came the too-long-delayed admission of the Air Corps Commander that Revolutionary Guard forces had shot down the airplane, and the adding insult to injury, additional video showed that multiple anti-air missiles had been launched at the plane over the course of a minute. A detail left out of the admission.
The same night the Air Corps commander was taking responsibility the Iranian Young Street returned to protests.  This complete incompetence and official mismanagement is exactly in line with what they’ve been protesting all along.   By last Friday the Grand Ayatollah was making a rare appearance at Friday Sermons to defend the Revolutionary Guard.(6)  It had little effect.

The crisis of legitimacy has spread beyond the Young Street and protests. Prominent newscasters, media personalities, film and television stars and directors are all now openly calling for more accountability from the regime. (7)  This is all occurring against a backdrop of Iran’s Supreme Council, which oversees key aspects of political power, disqualified ninety current lawmakers from running for re-election, a third of the sitting parliament. (8)

A Region of Instability

Although the Young Street shares demographic similarities and similar concerns, it does not appear that they are coordinated between one another to any greater extent than happens across the internet naturally. Each are responding to long-lasting systemic conditions in their countries that happen to share commonalities throughout the region. As a result, a band of instability has emerged, when combined with Syria, stretches from the Mediterranean clear through to the eastern borders of Iran. Whether this instability will result in reform or revolution remains to be seen. But there has not been such a volatile protest-based moment in the Middle East since the Arab Spring.  The InfoMullet harshly criticized President Obama and other western powers for missing that moment, offering a mixed and conflicted message that couldn’t seem to pick a side between dictators and the ones they oppressed as they brutally cracked down on the uprisings. From the grave of the Arab Spring rose the Libyan and Syrian civil wars and a resurgent ISIS insurgency asserting only militant violence could change the order of things in the Middle East.
Let’s not let history repeat itself if only for inaction. Support for the protest movements does not require military intervention – nor does it require exploiting the local movements for foreign agenda.  It may simply require acknowledging they exist, that their cause is just, their complaints valid, and that the world is watching how the regimes respond.