TLDRUpFront: We propose a compromise for consideration by the Senate on calling new witnesses and subpoenas for the President’s Trial. Let the House Managers and President’s Legal Team both present their requests and reasons why. Then let the Chief Justice of the Supreme Court rule on the relevance of each request. Then the Senate, in its Constitutional authority as ‘sole power’ for the Trial meet and vote to uphold, or overturn, each ruling by the Presiding Officer. 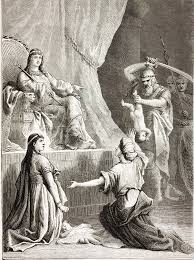 We noted last week that a “surprise would be a surprise” in the President’s Trial, but if it did arrive it would come most likely on the issue of witnesses. And arrive a surprise has.
The President’s Legal team complete their opening arguments today. After the House Managers concluded their session last Friday. Both arguments have been predictable, almost pro-forma in nature. The House presenting a case for abuse of power and obstruction of the House on the evidence gathered during two months of inquiry.

The legal team for the President have also focused their opening arguments on familiar themes. With some irony, a major portion of defense that the President didn’t abuse power by using his office to harm Presidential Candidate Senator Biden consisted of the President using his office to harm Presidential Candidate Senator Biden.  But to the charge itself the legal team didn’t so much dispute the facts as they did its interpretation. Key to the “misunderstood” argument are two points: first that no witnesses or document has clearly established the President’s intent in withholding military aid to Ukraine. Second, that the Ukranian government has not expressed any harm resulting from the request.

But on beginning on Sunday and continuing through yesterday surprises outside Senate walls undermined the legal defense being presented within them. (1) The first was a leaked copy of former National Security Advisor’s John Bolton’s upcoming book. In it he alleges that the President told him directly that withholding Ukraine military aid was to gain political advantage over Biden with an investigation announcement. This blows a Bolton-mustached-sized hole in the legal defense. The first time someone with direct interaction of the President is willing to testify and stick to their case that the President abused his office. (2)

Because the timing of Bolton’s fweeting, to be fired by tweet, and departure the day prior, September 9th, lies at a critical point of the WhistleBlower scandal timeline. Although at the time Bolton’s departure was presumed to be linked to disagreement on Ukraine, the InfoMullet began some months ago to wonder if it had any relation to Ukraine. Several have testified that Bolton’s reaction to Guliani’s effort and the President’s telephone call were to characterize them as a ‘drug deal’ and encourage NSC personnel to file concerns with White House lawyers. And the day Bolton left his job is the same day the Inspector General for the DNI notified Congress that a whistleblower complaint had been properly filed, vetted, but yet not acted upon by then acting-DNI Director Maguire. (3)

That sets the context for the second surprise this week – which is an interview with Oleksandr Danylyuk, who was the former head of Ukraine’s National Security & Defense Council. A technocrat appointment by then newly elected President Zelenskyl; Danylyuk alleges that the Ukrainian administration was “rattled” by Trump’s demands. He further adds that the only person in the Trump administration Ukraine trusted was – wait for it- John Bolton. And Danylyuk himself resigned his own position in Zelensky’s administration less than two weeks after Bolton’s fweeting, alleging in the interview he did so over growing concerns of the pressure campaign President Trump’s administration was placing on President Zelensky.

These new revelations remind GOP Senators that they don’t know what they don’t know. And has led some, such as Senator Romney, to a renewed call for witnesses to be heard. (4) Senator Graham, a long-time ally of the President has called for the Senators to be able to review Bolton’s manuscript. Others are preparing their own quid pro quo – tying the testimony of Bolton to allowing Senator and Presidential candidate Joe Biden or his son to be called to testify or produce documents. As our living analysis shows, the Democrats only need four GOP Senators to break ranks on calling witnesses or requests for documents.  We use our living analysis to track what looks like a split emerging on the question of witnesses. Last week, during the Organizing Resolutions, the GOP prevailed 53-47 on whether to call witnesses. We think given these new surprises and the statements made by several Senators that has now dropped to an even 50-50 split. 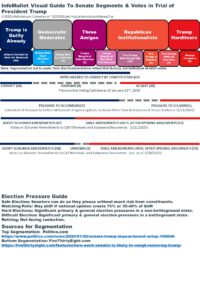 There’s time for this coalition to build or fall apart.  Here’s where we’re at on the Trial Schedule:

Today, Tuesday the 28th, marks a light day as the President’s legal team concludes their opening arguments. What follows is two days, or sixteen hours, of Senator questions and answers. These questions will be written down, submitted to the Presiding Officer, who will read them out and direct them to the House Managers or President’s Legal Team. This may give Roberts, who has been sitting on his hands, some sweet gavel action if either side steps beyond the boundaries he established last week in terms of decorum or behavior. We anticipate some Judge Judy moments.

But the key question – on witnesses – won’t be even up for debate until this Friday at earliest.

Which gives us enough time to offer this modest compromise for consideration on how the Senate proceeds on approving witnesses.  Although neither Impeachment nor Trial are legal processes, there have often been claims that we should at least follow or keep in mind legal procedures.

He’s is sitting in the room. He’s right there. At the front. And if there was ever an institutional role that is presumed to be objective about the law and hold a particular knowledge on determining relevance – we’d be hard pressed to find a better position than the Chief Justice of the United States Supreme Court.

It’s also what the Senate rules for Impeachment Trials allow, as cited from this standing document:

“And the Presiding Officer on the trial may rule on all questions of evidence including, but

not limited to, questions of relevancy, materiality, and redundancy of evidence and incidental questions, which ruling shall stand as the judgment of the Senate, unless some Member of the Senate shall ask that a formal vote be taken thereon, in which case it shall be submitted to the Senate for decision without debate; or he may at his option, in the first instance, submit any such question to a vote of the Members of the Senate. Upon all such questions the vote shall be taken in accordance with the Standing Rules of the Senate.”(5)

Our compromise as proposed would look something like the below process:

This simple compromise doesn’t prejudge any witnesses potential relevance until a presumably objective third-party has first made a ruling on it.  The Senate can heed that ruling, inform their decision making, or disregard it entirely in their votes. They are after all the ‘sole power.’ But they will have at least received an expert opinion on it first.

(2) We’ve had several “You’re goddamn right I ordered a Code Red!” moments already including from Chief of Staff Mulvaney, Presidential personal attorney Rudolph Giuliani; and even the President himself. But all have later disavowed their Colonel Jessup impersonations as being misunderstood.