TLDRUpFront: In a fortnight that saw the GOP go full Reek in the Senate and Democrats struggle to play duck-duck-goose without losing track of the ducks; this Radical Moderate has a few things to get off his chest about the self-neutering effect Partisan Populism on common sense and basic competence.  Content Warning: Radical Moderate red-meat-rant and meta-commentary lies below. 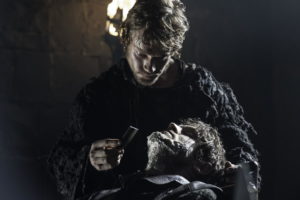 In Greek Byzantine culture, punishment of political opponents included blinding or castrating, as such would leave a rival “half a man” living “half a life.”  Castrating served the additional benefit of securing succession as a gelded man could not hold the throne and would produce no competing heirs. Eunuchs in turn were rewarded with trusted high offices and positions.(1)

From punishment a thousand years ago to voluntary celebration last week as all but a few GOP Senators lined up to give a warm close shave to the man who’s castrated their principles at every turn. This was done not in meek silence nor by half-measure, picking the blinding or the gelding. Instead Republicans doubled-down declaring “Why not both?”, like Oedipus shipping with Attis. And loud enough so even those in the back could hear the precedent set:

The President may send a swarm of their Officers to harass the People and eat out their substance.

The President can combine with others to subject us to a jurisdiction foreign to our Constitution.

The President need not Assent to laws, the most wholesome and necessary for the public good.

And finally, the President may obstruct the Administration of Justice be it from the Courts or Congress as they seek to investigate these matters.(2)

If this reads familiar it’s because they’re lifted in close paraphrase to the text of the Declaration of Independence describing King George.

There’s a saying loosely attributed to a Japanese proverb: “Prove to me you can do the small things before I trust you with the big things.” And if last night was any indication, the Democrats need to first prove they can successfully count heads in an exercise they have ostensibly been running since the 1800’s before I’m willing to trust them running a modern complex economy.

That it’s the day after and we still don’t know the winner of the caucus is both humorous and terrifying. Humorous because there’s a keystone cops to reading about what happened. Terrifying to the extent that the most powerful person in the world, or the one to run against them, is still largely influenced by a process that involves “milling around in a Methodist church while a 68-year old man counts one-by-one for two hours.”(3)

If we’re going to embrace bizarre election methods with dubious resistance to rigging we shouldn’t just learn from Athens, but also Kievan Rus. For the Rus, the Viking forebears of Eastern Europe including Ukraine and Russia, democratic voting was accomplished in simple form. Villagers grouped on sides of an issue, mounted a platform a few feet off the ground, and beat each other with sticks until only one side still stood on top. It has the attraction of balancing majority-rules with intensity of commitment. You know that despite being in the minority, those Kievan Bernie Bro stick jockeys weren’t going to go down easily. And it’s easy to tell who won because they’re the last ones standing on the platform, from whence the term “party platform” first came into use. (4)

I’d Prefer Not to Care about Missouri or Iowa

The Presidential concerns of the last 48hours revolve around Iowa and Missouri, whom President Trump failed to realize was the state the Super Bowl winners hailed from.

To be honest there’s so little in Missouri or Iowa that draws my daily attention I’ve taken to grouping the lot of them to “WhateverLand.” And this isn’t some disparagement of fly-over country, which is quite wonderful every time I’ve been there for work.  It’s that the neural transmitters which would store these geographic details are instead remembering an exceptional Go play from 25 years ago. Because I have priorities.

The reason I have to care is this country has twisted itself until the People are serving the needs of the Partisans Populists rather than the other way around. And for Partisan Populist, be they Red or Blue, there is a certain common framework both share.

A long time ago in a LiveJournal far-far away, an earlier version of the InfoMullet opined that a politician running on a religious platform must be the easiest con ever. For someone who spends their career laboring to earn votes, the lie of “I share your beliefs” is quicker than persuasion; cheaper than bribing and takes less skill than demonstrating competence. Invocation of spectral evidence can defend it: “I know your pain,” “I share your beliefs”, “those other people are bad, and I’ll protect you from them.”

In retrospect, this wasn’t some Voltaire moment of flashing insight on my part. Anthropologists call it “local-social currency” and it could be religion, ideology, or any of a number of constructions of shared identities. It is the costume that gets the one who wants power into the costume ball where power dances. And once in power the Populists lose that costume faster than Cinderella’s finery returns to rags at the stroke of midnight.

None of which would matter if the costume ball had some structural form or function, let’s call them checks and balances, that limited the harm which could be done once within or was attended by institutionalists who respected the same.  I don’t begrudge the politicians a chance to dance the night away as long as it’s not leaving the rest of the country with a ball-sized hangover afterwards. But the last twenty years has seen the simultaneous systemic dismantling of limits upon Federal power, and especially the Executive Branch within it alongside the rise of the Populist politician, who in vaguely serving the small-p “people” can respect no limit even of their own party, let alone the limits of the collective big-P “People.” And increasingly the parties facilitate this unlimited power when it’s their turn to lead the dance.

Eunuchacy is doing the same thing and expecting different results

Democratic politicians may Tweet #Resistance; but though they fear fascism, they love government more.  Republicans may thump a copy of Atlas Shrugged, but though they fear totalitarian socialism they love staying in power more. The central platform of the Democratic party in 2020 is that President Trump, and future ones like him, doesn’t have enough consolidated power and we need to shovel some more coal in the Executive boiler. The Republican 2020 platform is that a Totalitarian Christmas Carol is a nice-enough play as long as the Big Man in the S*** -Hole Administration wears a Santa hat and the three ghosts of Republican self-respect: past, present, and future roll over in their graves; wander the wilderness; and wonder where their governing legitimacy went respectively.

Fighting fascism and totalitarian socialism abroad requires basic competency. Fighting them at home requires adherence to limited government such that the power used as fuel for the fires of those nightmares aren’t just laying around awaiting a spark. And it is the Partisan Populists who snap limits on power like twigs to accumulate the pile of kindling that we call the Executive Branch. But it’s not a pleasant cooking fire campfire when the sticks they break don’t belong to them and the fire they light is in someone else’s house.

We can begin a thought experiment by accepting the premise that absolute power corrupts absolutely. We extend that by recognizing that there is no more powerful position in the world than President of the United States. We should then accept that electing thespian Theologians will lead to theft and performative Pietists to pyromania. Trusting an already Partisan Populist to limit themselves is like trusting the firebug with a can of gasoline and a zippo lighter.

And this is where the logic breaks down. Red and Blue partisans who should be terrified of a future opponent gaining access to unlimited power fall instead for an “us vs. them” argument of the moment. Unwilling to yield an inch today they give a mile tomorrow. Because when right and wrong is reduced to an equation of virtue-signaling against a group they admit they despise, no partisan ever gets beyond the temporary “but what about them” behavior we see Senate Republicans engaging in.

Exhibit A of this comparison paradox is how little the Democratic platform reflects the reality of what’s occurred in the last three years of this administration. We are now past the Iowa Caucus, if not its final results, and we still have no platform that articulates how the power of the Executive would be limited so that a Trump administration never happens again.

But instead we hear from Republicans how if we dare manage this President we might be asked to manage future Presidents. And we hear from Democrats that the real problem of this administration lies only in who was elected and trust us this time we’ll totally make sure a better person is elected, as soon as we’re done counting votes in Iowa.

I am comforted by neither.

A Proposal for Primaries and Impeachment

I don’t like to rant without offering a solution, so let’s consider some alternatives. And no I don’t mean adopting Kievan Rus primaries, even though New Hampshire is coming up. And though these two cases are very specific manifestations of the broader problem, we can’t fix everything in a single post. But we can make a start.

Let the primary be split across three dates: First, Middle, and Last. And let each State pick its preference for just what kind of pretty-pretty-princess or pretty-pretty-prince they wish to be.  Do they want to help pick front-runners, wean the field on a Super Tuesday, or close the deal? And that way if one of them has a melt-down it won’t matter as much. Structural limits have a way of defusing crises created by the adoption of exceptions.

And as for what to do with the President? Let’s start with the premise that the highest office in the land with a sworn duty to protect and defend the Constitution has an higher obligation upon them than any other. And although there is room for debate where the bar of valid cause for Impeachment rests, can we at least say that the use of private agents leading a concerted effort to bypass Constitutional protections against unreasonable investigation to target a political opponent through the means of foreign interference; purchased with the national security concerns of the country; and obscured by defiance of Congress and Courts lies beneath that bar?

And if by doing that we set our standard of behavior so high, and our bar for impeachment so low, that we are compelled to regularly Impeach future Blue and Red Presidents for similar abuse of an unlimited government so contrary to our foundation that it is spelled out in our Declaration of Independence?

Then let’s Impeach every damn one of them.

(2) At the very same time the White House legal team argued in the Senate that the President’s asserted immunity from Congress should best be decided by the Courts, there was an equal and opposite argument by White House lawyers in Court the President’s asserted immunity from the Courts would best be decided by Congress. This is less an irreconcilable paradox than a Chinese finger trap of reason, when one stops trying too hard to justify either direction they’ll see that both positions are flawed.  https://www.politico.com/news/2020/01/30/trump-impeachment-house-109770

(4) Not really. I’m making this part up. The rest is true though.