TLDRUpFront: Over 10 redesigned applications for COVID19 Stats including Cases, Death Rates, Rate of Change in Cases, Hospitalization Rates, Remaining Hospital Beds, and Remaining ICU Beds by State. For Countries we track Cases, Death Rates, and Rate of Changes in Cases. Users can create custom comparison charts between States or Countries and download as images or data files. 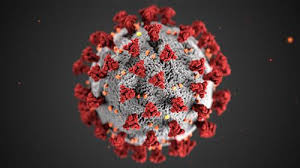 Bookmark this page! The Mulleteer Data Science Team has revised and updated our popular interactive applications for tracking, understanding, and advocating about COVID19. All charts are interactive allowing users to create their own custom Comparisons and save that as an image or download the data for additional analysis.

Compares the Daily Rate of Change in Confirmed Cases across up to five States. Source: covidtracking.com Updated: Daily

Compares estimated Hospitalization Rate for COVID19 Patients across up to five States. Does not include 95% CL. Source: https://www.cdc.gov/nhsn Updated: 12pm EST Tuesday, Wednesday, and Friday.

Compares estimated Hospital Beds remaining across up to five States. Does not include 95% CL. Source: https://www.cdc.gov/nhsn Updated: 12pm EST Tuesday, Wednesday, and Friday.

Compares estimated ICU Beds remaining across up to five States. Does not include 95% CL. Source: https://www.cdc.gov/nhsn Updated: 12pm EST Tuesday, Wednesday, and Friday.

Compares Confirmed Cases (Tested Positive) across up to five Countries. Note Y-axis is logarithmic. See notes below for methods and caveats.  Source: WHO Updated: Daily .

Compares the Daily Rate of Change in Confirmed Cases across up to five Countries. Source: WHO Updated: Daily

Primary charts for individual States and Country Confirmed Cases, those that have tested positive, Confirmed Deaths, and a calculated estimate of Actual Infected. We’ve known for some time that Confirmed cases is the lower-end of potential actual because of limitations of who gets tested, asymptomatic cases, policies don’t allow for testing, or simply tests aren’t available.

Our method of calculating Actual Infected does not rely on any testing data and may be more ‘accurate’ as to the total infected population in an area than Confirmed, even if it is just an estimate.  That method, described below, gives us a good understanding of total infected up to a point 20days ago. At that point we forecast three scenarios which represent the range in which the contagion may have changed between our last good-estimate and today.

Feared is the worst case of continued outbreak, Mid indicates a transition between outbreak and decline, and Hoped represents a decline. These three forecasts give us a range of uncertainty at the current Actual Infected but allows us to compare all three to the current Confirmed via testing. Although every chart varies – three notional patterns emerge that aid in understanding what’s going on.

Forecast calculated actual lines are above confirmed line and the gap is increasing. This indicates inability to conduct sufficient testing and means Confirmed cases may not be a reliable proxy. These conditions occur prior to, during, and just after an uncontained outbreak.

However, the above all implies that a government is accurately reporting COVID-19 deaths. Under-counting, missclassification, and/or trying to “hide” deaths can create behavior modes that do not represent real conditions.

Note that the vertical axis is a logarithmic scale of base ten. This allows us to chart entity totals as they rise from under 10 to over 2M. But don’t misread a line “half-way” up the chart as being halfway to 2M. Halfway up the chart is 1,000 meaning it’s still 2,000x smaller than the value at the top. Charts generally refelct most recent 60-90 days of available data.

How we calculate actual infected in the past on primary charts

We determine Actual Infected by using actual deaths due to COVID-19, which are better tracked, and then making a few assumptions to calculate an estimate of total infected. These assumptions are:

Note: The second assumption is an -assumption- used for mathematical modeling purposes only!! Actual death rates to the virus vary across countries, age demographics, extent of underlying conditions, access to healthcare, the ability of hospital systems to handle surges of patients, and have ranged from under 1% to over 10%. See our interactive chart to compare death rates by country. Also as the size of the contagion increases, broadening the underlying demographic at risk we are reviewing this rate for adjustment.

How we calculate  Actual Infected up to Today

This gives us a reasonable estimate of Actual Infected, but it’s 20 days in the past.  To “grow” that 20day old estimate into an estimate for today, we take a seven-day average of the Rate of Change in Actual Infected up to I-Date, and then apply the three forecasting scenarios to that Rate of Change: Feared, Mid, and Hoped. Each scenario is a 20-day segment of a lifecycle of the contagion, and the behaviors of Rate of Change are illustrated below. 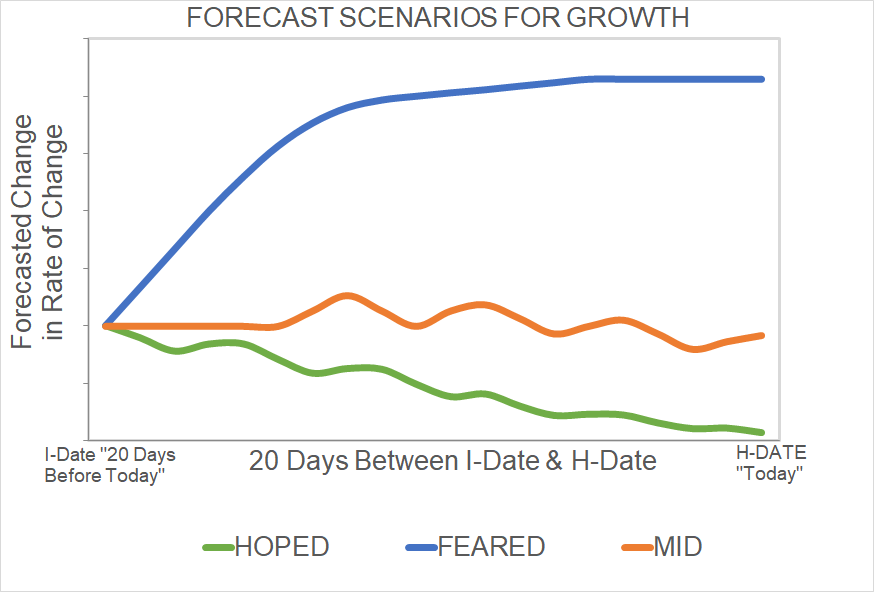 Death Rates over time tell us the changing impact of COVID-19 as it moves through Wave 1. A rising or declining Death Rate indicates dynamically changing conditions in the State or Territory. It differs from a Per Capita Measure in focusing just on the deaths within the population who has been Confirmed to have the infection. Given that COVID19 outbreaks are highly localized in clusters this is an important measure to use in context with Per Capita as a State overall may be spared but a few hotspot clusters that overwhelm local services can lead to a sharp rise in deaths. Causes for dynamics observed could be from from strain on the healthcare system, different criteria on who gets tested (and thus adds to Confirmed), and a State’s pandemic response policy. Regardless a rising Death Rate should be taken seriously. Use it with the Confirmed Cases Chart (see below) to understand the size of the population impacted by this Death Rate.

How we calculate Death Rates

The rate is calculated by taking COVID19 Tracker death counts and dividing them by the confirmed cases on that day. The chart is set to only display 0-10% for greater clarity. These charts are adjusted to display only the last 90 days of date. Also to avoid noise the death rate calculation was only applied once a country had passed it’s 20th death related to the infection. Keep in mind the ‘death rate’ is of confirmed cases only and should not be taken as applying to the total population of a State!

As daily testing protocols struggle to keep pace with the pandemic, Confirmed cases are lagging far behind Actual Infected.  This may also artificially inflate death rates at a point in time.  To understand the potential of this impact look up the Primary Chart for a State or Country in question to compare Confirmed to Actual Infected.