TLDRUPFront: In our ongoing series Revealing MESconduct we review the Violent Actors Pool. This pool describes the warning signs, challenges, and lessons learned from investigations on reported  Weaponizing misconduct that volunteer organizations may face. In the Creaky Stair Pool are 21 investigated offenses across four alleged perpetrators. 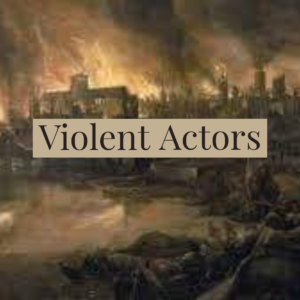 FullContextintheBack: This article is a subsection of Revealing MESconduct Part2: Investigations & Lessons Learned. The series is based on two years of volunteer work investigating accusations of misconduct in a volunteer gaming organization, the MES. Part 1 dealt with balancing the tensions between survivor privacy, community education, and community safety. Part 1 also covers frequently asked questions about where the information came from, whether it is publicly available in other forms, and my motivations in doing this.  Part 2 provides an overview of the 180 investigated offenses across 11 alleged perpetrators. The investigated offenses are segmented into six pools examined in sub-sections like this: Weaponizers, Creaky Stairs, Broken Stairs, Violent Actors, Broken Staircases, Serial Predators. Each pool summarizes the kinds of accusations, warning signs, challenges, outcomes, and lessons learned of those accusations and investigations. The lessons learned in each pool aren’t always limited to that pool and alleged perpetrators may have investigated offenses in more than one pool. Many of them apply across pools. In this article I’m focusing on a single type of reported misconduct: Violent Actors.

Violent Actors consist of both violent acts and threats of violence. The first is often easier to deal with it publicly witnessed.

There are 21 investigated offenses in this pool. Offenses include 16 Major Offenses, 1 Severe Offense, and 4 Extreme Offenses.

Accusations in this pool include making implicit or explicit threats of violence, violent acts that risked harm to members, and violent acts that harmed members. Our investigations obtained information consistent with the accusations.

Warning signs on violent actors are public drunkenness at events combined with “winner take all” mentalities. Another warning sign is enablers who provide cover or try to downplay the acts.

One challenge of these investigations is the accused arguing their threats did not meet the legal definitions of a threat. However, volunteer organizations are not criminal courts. They don’t need to meet a legal standard to act administratively for its members’ safety. Another challenge is covering-behavior—friends of the accused taking actions to rationalize their behavior or officers not documenting prior violent acts. For one alleged perpetrator accused of violence harming a member, the investigation found information corroborating a string of past incidents that received only verbal or email warnings from an officer. Acting on this information, the MES reprimanded the officer and moved to expel the accused.

‘We’re all adults about drinking’ only works if everyone adheres to the same social contract. Even as power is the enabler of most misconduct alcohol is a side-car companion when it comes to violent misconduct. Excessive drinking and over-drinking are present in many accusations of violent and aggressive behavior. Organizations that tolerate, or look the other way, over-intoxication and clear intoxication during events are inviting future misconduct in areas ranging from game-space, public areas of conventions, closed-door meetings etc. This erodes member enthusiasm while also raising risk of aggressive or violent misconduct.  If an organization, especially in the United States where binge-drinking is prolific, is going to allow drinking at it’s event it needs to clearly articulate and enforce expected standards: limited social sipping, general drinking, or a frat-house party binge-drinking environment. Expected consequences will follow what’s tolerated.

Analyze behavior patterns to minimize they-said/they-said reductionism. When conducted in private, threats are often reduced to a “they-said/they-said” construct unless documented in email or social media. The alleged perpetrator, or their enablers, argued the statements were misunderstood or didn’t mean that. However, Violent Actors are as habitual as other pools of behavior. When a single complaint isn’t clear, see if there have been past complaints or concerns. Do the complaints match a pattern of behavior: similar circumstance within which the threat occurred, similar method or phrasing in delivering a threat, similar beneficial outcomes the violent actor sought?

In keeping with the final general lesson learned in the main article, I am calling upon the MES to do the right thing. Follow its procedures to release limited information found in “Notifications Regarding Officers” of their handbook (see MH2018Q4 p70-74 and 2020 MES HB, p95) and apply it for the alleged perpetrators of the Violent Actors Pool. This information consists of: