Home  »  Domestic Affairs • InfoMullets   »   Dreaming of a White-Architecture Christmas
Spread the love
TLDRUPFront: If 2020 couldn’t get any weirder. President Trump issued a massive Executive Order mandating “classical architecture style” on Federal buildings and appointing a Presidential Council to oversee it. Nope. Not kidding. Following the money however reveals that this is likely a pay-to-play money grab for Trump on his way out the door. Federal construction is expected to double this Fiscal Year driven in part by a 44% increase in military construction to the omnibus spending bill scheduled to pass Congress today. And the President can appoint the lion shares of Council members who will steer the “aesthetic” designs of that construction. 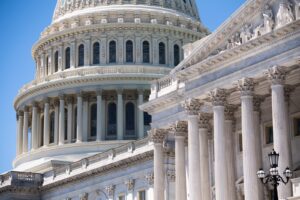 You see this and can almost hear the soaring of eagles.

FullContextInTheBack: This is one of the strangest EO’s or regulations I’ve ever had the pleasure to analyze. And that includes USC Title 10 language on pigeons as an element of national security.

It starts with a “Purpose” that gives a solid-B college essay on the history of classical architecture. After a tip of the hat to Greece and Rome it provides some useful context, even quoting the Constitution of Siena in 1309 because why not? It then skips like a flat stone across the water to touch on Washington & Jefferson, with their favor of Palladio style because #FoundingFathersSoaringEagles. It then leads ahead to the turn of the 20th Century with the classical revival. And still has room to throw some serious shade on other styles. Among other things, assuming no conflicting language in other regulations (which I can’t imagine there is) we now have a statutory definition of what “Brutalist” and “deconstructionist” actually is. I can almost hear the MFA’s screaming ‘But that’s wrong!’ [1]

Putting arguments over aesthetics aside for those better equipped to handle it (I see you AIA!)[2]. The length of the Purpose statement, at over 1,000 words, begs the question of what are they trying to hide on the far end of that scroll? Other than white supremacy?

Turns out a lot. Federal construction is big $$$ business. And it’s all overseen by the General Services Administration (GSA) which acts as a central clearing house for Federal purchasing. Annually they oversee ~$4.5B in new construction and alteration projects, letting contracts and administrating procurement on behalf of Federal agencies.[3] Any influence on this process outside of traditional purchasing criteria of best value, functionality, and an open competitive bid process could make design firms milllions of dollars. And it appears that’s the real purpose of the EO, though you have to get to Section 4 to read the details.
The EO establishes a ‘President’s Council on Improving Federal Civic Architecture’, this Council has aesthetic influence on GSA procurement processes. The EO lists who sits on this council which are the 8 members of the Commission of Fine Arts, the Architect of the Capitol, the Commissioner of the GSA Public Building Service, and the Chief Architect of the GSA. Which seems like a reasonable cast of 12 cats who one would expect to chair a commission on Federal aesthetic. But the EO also allows the President to appoint any number of officers or employees of the Federal government as well as “up to 20 additional members appointed by the President from among citizens from outside the Federal Government to provide diverse perspectives on the matters falling under the Council’s jurisdiction.”  These appointments are not subject to Congressional oversight, meaning it’s not hard for President Trump to stack the deck with plumb assignments to loyalists in the government or crony-capitalist design firms who may want to cash in. And although the GSA is encouraged to seek out comments from the “General Public” which is designed to avoid those who may have conflict of interest on business before the GSA, the members of the Council are specifically *not* precluded by having conflict of interest from serving.
What’s even more interesting is that the the Presidential Council only lasts through September of 2021, the end of the current Fiscal Year. This is odd for Presidential Councils and Commissions which have a history of staying around and growing roots in the swamp that is DC.  Doing a quick search through Federal appropriations bills found out the possible cause. A lot of big ticket backlogged construction projects are scheduled to kick off in Fiscal Year 2021. The big one is further construction on the massive DHS St. Elizabeth’s West headquarters and the long awaited new DHS headquarters. And although GSA normally oversees $4.5B in Federal construction, FY2021 plans to be a bumper year with almost $9B in construction costs appropriated. Driving that is a 44% increase in Defense construction related spending tucked into the National Defense Authorization Act (NDAA) omnibus bill. [5] A bill which…wait for it…is supposed to pass today.

So this Executive Order isn’t all that unusual. President Trump is returning to his roots running frauds on the taxpayer with government subsidized or funded construction projects.

And they thought we wouldn’t notice.