TLDRUpFront: ISIS conducted a complex attack in the center of Baghdad killing over 30 and wounding over 100. The time, location, and method all symbolize the deadly return to the city ISIS once terrorized putting an exclamation point on their operational recovery in Iraq. Widespread insurgency could come next. 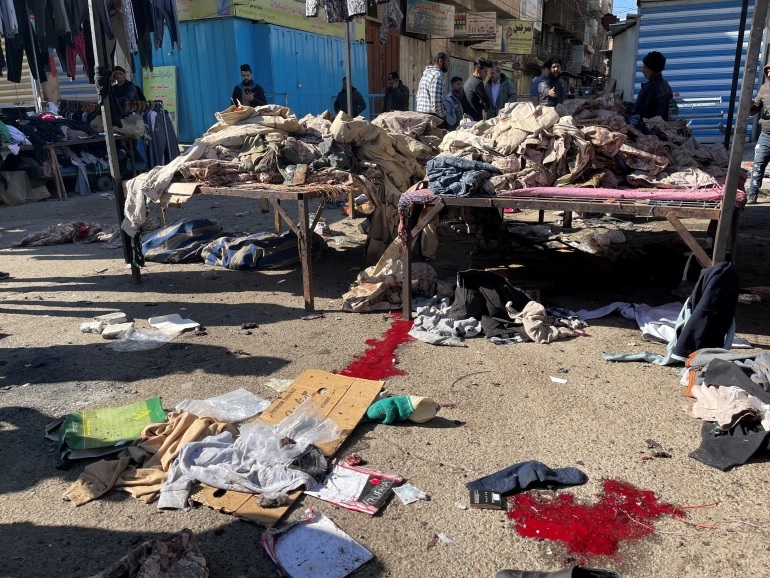 ISIS Revisits the Scene of the Crime to Offend Again

A complex attack consisting of two suicide bombers occurred in Baghdad for which the so-called Islamic State of Iraq & Syria (ISIS) has claimed credit.[1] The first bomber faked an illness drawing onlookers in closer before detonating, and the second bomber detonating. The second attacker then targeted those rushing to help the victims of the first attack. Currently 32 people are killed and over 100 are wounded. [2]

The location and date are significant. ISIS faced territorial defeat in the latter months of 2017. The last major terrorist attack by ISIS in Baghdad occurred three years ago to within a week of today, using the same method of twin-suicide bombers, and in the exact same location, Tayaran Square, as today’s attack. Even the casualties are eerily similar, the January 2018 attack killed 36 and wounded 105. [3]

Which makes this feel more like an announcement of intention than just another attack. ISIS is known to use high-casualty attacks to signal the openings of campaigns and the similar time, location, and method of this attack to the last makes it hard to believe it’s just coincidence.

What is ISIS Announcing?

“We’re Back – But We Never Really Left.”

In a 2016 presentation on ISIS given at Delft I was asked to forecast “what would happen next” if ISIS collapsed as an emerging-state actor. I predicted that if the international coalition took its eye of the ball, ISIS would revert to a clandestine terror network and return as an insurgency in 5-8 years. This “5-8 year itch” is based on the historical models of how long it takes an defeated emerging-sate or insurgency actor to reconstitute itself, rebuild its network, and return to operational strength. Here we are not five years from that conference, and only three years from the final loss of territory, and ISIS is a fully operational terror network in the region and on the brink of a full flung insurgency.

The conditions contributing to this rapid return are several. First, President Trump falsely claimed ISIS was “defeated” when they lost their last territorial holding in Iraq. This caused the US to take its eye off the ball in both Syria and Iraq in counter-ISIS operations. The President was in good company with his error however, as his predecessor President Obama committed a similar mistake with al-Qaeda falsely claiming its “defeat” in the 2012 election. President Obama was just building on the original sin of President Bush who shifted the US focus away from defeating the Taliban in Afghanistan to prepare for war in Iraq in 2002 and 2003.

CENTCOM statistics of US & Coalition air strikes in Iraq and Syria clearly show a major reduction over the 2017-2020 period. To be clear, air strikes are not a clear measure of the effectiveness of a counter-ISIS strategy; but they are a useful proxy for how the “ISIS was defeated” political message designed for domestic consumption in the US led to underestimating the actual threat in theater. Especially as ISIS operations began ramping up in 2019 and accelerating in 2020. [8]

How the US took its eye off the ball… 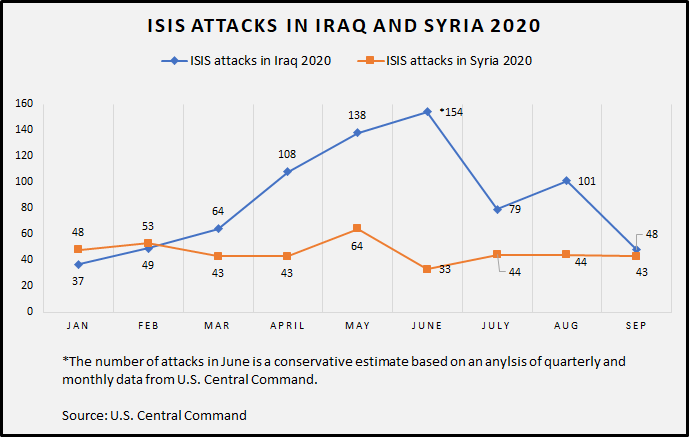 …just as ISIS picked it up.

This reduction in focus was exacerbated by conditions on the ground in 2019. At the same time President Trump shot ourselves in the foot and stabbed our Kurdish SDF allies in the back with a unilateral and ill-advised withdrawal from northern Syria, a new wave of protests from the New Young Street broke out across Iraq. These protests against government corruption, incompetence, and stagnant economy were of a form to those seen in Lebanon and Iran.

With no connection to existing political blocs, in or out of power, the youth protesters were met with a lethal crackdown engineered by Iranian PMC’s and tolerated if not joined, by Iraqi government security forces.  The killings of protesters, over 500 in total in the fall of 2019, led to the resignation of Prime Minister al-Madi and a complete breakdown of national government. After resigning, al-Madi was appointed back as a powerless caretaker.

Two attempts to form a new government failed and only in May was the technocrat Mustafa al-Kadhimi appointed as another caretaker leading to his election as Prime Minister. al-Kadhimi was an exile during most of Saddam’s reign and returned after the US invasion to lead the Iraqi Intelligence Services. Although considered a pragmatist and capable of working across Iraq’s diverse factional groups, al-Kadhimi has struggled to maintain security as he works on his primary task: securing the Parliamentarian elections scheduled for June 2021. [10]

The June elections are key, as discussed here, because it’s the first real challenge the new young street will be able to make against the traditional factional power-blocs that have controlled Iraq over the last 17 years. During US occupation and after withdrawal power-sharing agreements were put in place to ensure an apportionment system that reflected the needs of key factions and their leaders. Factions that the new young street have rejected since 2019.

Iraq is in essence a failing state, and the June elections may prove to be a death-bed miracle recovery or the final nail in the coffin leading to a collapse and possible partition of the state among competing interests. Less than two weeks ago a policeman was killed and dozens injured in major violence between anti-government protesters and security forces in Nasiriya. [6] And over the fall dozens of businesses were raided by Iranian supported terror networks like Rab’Allah. Unlike the PMC’s, which were organized to fight ISIS and exist in a space similar to the paramilitary Basji in Iran, the new terror networks target businesses accused of spreading “social corruption” such as massage parlors and liquor store. The impunity with which these armed groups attack businesses with no repercussions from the government or PMC’s has led to many paying protection money to stay safe. Such extortion rackets are a strong indicator of failing governmental power. [9]

Into this fractured environment ISIS is returning with a vengeance. Though never “defeated” in any meaningful sense of the word globally, ISIS had been limited in it’s capability to conduct attacks in Iraq in 2018 and 2019.  But in 2020 alone ISIS claimed nearly 600 attacks in Syria and over 1,400 attacks in Iraq. The discrepancy between CENTCOM’s numbers and ISIS claims deals with what is considered noteworthy. CENTCOM tends to track bombings and rocket attacks while ISIS, tracks “performance measures” such as stabbings, kidnappings, and running over apostates with cars in addition to murders and bombings. They actually publish annual reports, not unlike corporate filings, detailing their crimes.

The risk of a rising ISIS was apparent enough in 2019 that in response to a 2020 NYE AMA forecast question on ISIS’s strength by the end of 2020, I made the following forecast a year ago.

Q8 What will ISIS look like by the end of 2020 in the Middle East specifically in terms of strength and structure? Will it continue to be a degraded and simmering problem, eradicated, or reform into something more enduring and virulent?

Then, in December of 2020 I reviewed that forecast as part of a Facebook Live Episode  explaining how ISIS was already exhibiting proto-insurgency conditions in parts of the Sunni Triangle. And if that horse wasn’t glue already, in the 2021 NYE AMA session a Mulleteer asked virtually the same question as in 2020 NYE AMA and I provided this forecast: that the largest growth of ISIS in 2021 would be in Iraq.  The paint isn’t even dry on that forecast. I haven’t had time to write the accompanying article due to a blip of domestic instability, #JAN6WasAnInsurrection, and here ISIS is proving my point.

If ISIS is going to launch a significant offensive in 2021, either as bombing campaigns or to attempt to broaden it’s current insurgency, the time to watch is April-May-June. The Islamic holy month of Ramadan, which ISIS exploits to launch major attacks falls across April and May of 2021 and could cause major security failures jeopardizing the June elections. And June isn’t just the crucial Parliamentarian elections, it marks the seven year anniversary of ISIS’s 2014 Anbar offensive which resulted in their declaration of an Islamic Caliphate.  [7]

That’s quite an itch to scratch.