InfoMullet is collaborating with Science Decoded to bring a series of articles on COVID19. To view more of Science Decoded’s content including live-updates, Ask Me Anything videos, and even a few COVID19 related memes check them out on Facebook.

TLDRUpFront: Science Decoded decodes the terms related to strategic risk for COVID19 with the analogy of a dart board. Throw enough darts, and eventually one will hit the bullseye. 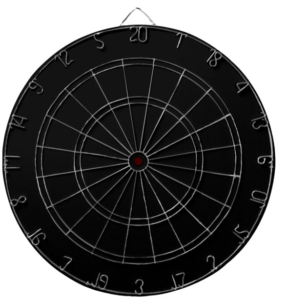 Care to make a wager on this game?

In a previous InfoMullet the strategic risk of a new variant arising that defeats our current vaccines was discussed. But what’s in a name? What is the difference between a mutation, viral isolate, viral variant and viral strain? Quite a lot, it turns out. There is also substantial disagreement between researchers, doctors, and epidemiologists over the definitions of those terms. These are the definitions I use:

By those definitions, there are literally tens of thousands of viral isolates of SARS-COV-2. Practically every time the genome is sequenced, a new isolate is discovered. Viruses mutate all the time, with one or more nucleotides in their genome changing nearly every replication cycle. SARS-COV-2 mutates more frequently than many others (though less frequently than the worst of the lot, like HIV or Influenza) due to its structure, also. There are thousands of replication cycles over the course of the average person being infected with COVID-19. So, while we know of tens of thousands of viral isolates, there are probably millions out in the world. Greater than 99.9999% of those isolates, and the mutations they carry over what is considered “standard” COVID-19 (that is, the sequence first isolated in Wuhan in late December 2019), have no effect whatsoever on the virus or the disease it causes. They might be interesting scientifically, but they have no practical impact in the world at large.

But, a handful do. So, what IS mutation and why does it matter?

To understand mutations picture a person who is blindfolded, standing in a dark room, told to throw a dart at a dart board placed ten or twenty feet from them. They have no idea where the board is, and a friend spins them until they are dizzy and have no idea where they are facing before they even begin. A lot of times the dart misses the board entirely, but also misses their friend, and so is just a wasted throw. A few times it hits their friend, who is bigger than a dart board, or ricochets back and stabs them in the thigh. A very few times, it hits the dark board. Even more rarely, it hits the bullseye. That is viral mutation in a nutshell. 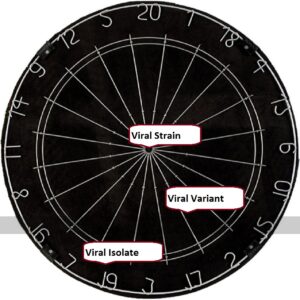 Give a drunk enough darts and they’ll eventually hit the dartboard.

The darts that injure someone and lead to the virus dying are not remembered and quickly die out. In scientific language those are deleterious mutations that injure the virus, and keep it from replicating. Those are actually more common that the beneficial ones that help the virus survive, replicate or infect new hosts.

The darts that miss the board and don’t injure anyone – the vast majority of darts, overall – are simply new viral isolates . They are unique genetically, but also practically identical to existing varieties of the virus and to the disease it causes.

The darts that hit the board but not the bullseye are new viral variants. They help the virus to some significant degree to reach susceptible targets more quickly, or to more effectively replicate within those targets (sometimes making them sicker, but helping the virus spread more easily).

The darts that hit the bullseye are new viral strains. They help the virus reach new, normally non-susceptible persons. They might also have effects associated with new variants, but don’t always. Evolutionarily it is helpful for new strains to have those mutations also, but they will not necessarily. 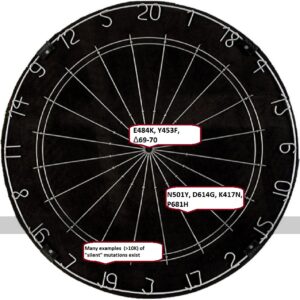 Give a drunk billions of darts and they’ll eventually hit the bullseye.

Later on, I’m going to use a nomenclature that is unique to Science Decoded and it’s InfoMullet articles for now, to represent the various forms of COVID-19 without stigmatizing any countries by naming them after the place of origin. The naming convention works this way: DISEASENAMEs#v#i#, with the “s” standing for “strain,” the “v” standing for “variant” and the “i” standing for “isolate”. The numbers start at 0, with the first Wuhan isolate being COVID-19s0v0i0, and going up from there. If “s” or “v” are omitted but “i” mentioned, assume the omitted numbers are a “0.” Where “s” or “v” are included, but “v” or “i” are not, assume that I am speaking about all forms – whether isolates or variants – of a given strain or variant. See the table from Wikipedia that lists the mutations associated with each isolate, as well as their country of first detection. It is likely that any isolate with the E484K mutation will demonstrate a similar antibody neutralizing effect as the South African strain does, so collectively I will refer to them as COVID-19s1.