TLDRUpFront:  US Military forces killed ISIS Emir al-Qurayshi in the Idlib province of Syria. Leader-centric combatting terrorism policies don’t work. But a leader’s death does open up a succession struggle over who will be the next Emir and how ISIS affiliates will or won’t declare oaths of loyalty, known as bayat, to the new leader. 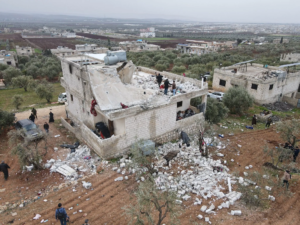 Both the White House and numerous other sources have now confirmed a US military raid into the northwestern Syrian province of Idlib[1]. The raid was carried out to attack the hideout of the so-called Islamic State of Iraq & Syria (ISIS)’s leader, Emir Abu Ibrahim al-Hashimi al-Qurayshi. al-Qurayshi took over as Emir after a previous US raid killed al-Baghdadi in 2019.

Described in ISIS propaganda as a sort of everyman worshipping working scholar, al-Qurayshi was allegedly a competent battle leader, and supposedly played a key role in directing the genocide of the Yazidis in Iraq during the Anbar offensive of 2014. But he never distinguished himself to the extent previous high-profile leaders in ISIS or its predecessor organizations, including al-Zarqawi or al-Baghdadi did[2].

The raid occurs during a period of heightened ISIS activity in Syria. Though not quite at the level of an emerging-state actor it occupied in 2013-2018, ISIS remains a powerful insurgent force. Just last week it launched a major jailbreak at a prison in northeastern Haskah holding thousands of ISIS prisoners. I’ve previously covered how ISIS uses jailbreaks to quickly recruit battle-hardened militants. And this was no Bonnie & Clyde operation. The Al Haskah facility is a massive detention facility I profiled as a high-risk area for such jailbreaks when the US abruptly pulled out of Syria in 2019. Several hundred ISIS fighters attempted to break free several thousand detainees and causing nearly 300 deaths while over 45,000 civilians fled the area.  It took the Syrian Defense Force (SDF) several days to contain the breakout and recapture most, if not all of the escapees[3]. This Syrian uptick follows a noticeable increase in ISIS-directed violence in Iraq as well.

Syrian White Helmets, a rescue organization, claimed 13 people died including 4 women and 6 children. Although the white helmets did not specify the cause of death, local reports allege the structure was struck by US missiles. The US maintains that an interior explosion, as the raid was unfolding, caused the damage. The photographic evidence provided so far seems to confirm the US version. The rubble pattern shows that the ceiling of the top floor collapsed while the exterior walls blew outward, scattering rubble around the base of the perimeter. But the floor itself not only remains intact but structurally sound enough to conduct rescue operations. Suicide vests, when detonated, explode upwards and outwards creating such damage patterns. Grenades on the other hand explode in all directions and would damage the floor as much as they did the wall or ceilings. And missile strikes penetrate inward from the ceiling downwards, buckling ceilings and floors creating far more damage throughout the entire structure.

One of the (many) flawed strategies in the Global War on Terror was a leader-centric approach that envisioned if we could just kill enough “senior leaders” or “high-value targets” groups like al-Qaeda would suffer operational setbacks. The death of each major leader was therefore a cause of celebration, not just as a good thing that a bad person died, but some strategic objective like a successful D-Day invasion. President Bush fell for it believing the death of Saddam or later al-Zarqawi would lead to a collapse of resistance against US occupation in Iraq. President Obama made the unforgivable error, or intentional manipulation, of promoting this flawed viewpoint to set himself up for the 2012 election. After the death of Osama bin Laden, President Obama repeated “Al-Qaeda is on the run” and limits to a “small core of hardened followers in Afghanistan-Pakistan,” when this was anything but the case. This mental model, I believe, led directly to the administration’s push of the “angry mobs” narrative of Benghazi rather than acknowledging the role of Al-Qaeda-aligned militant groups in the attack. It also led to the President’s early dismissal of ISIS as being like “JV” basketball players who put on a Lakers shirt and thought they were “Kobe.” The carrying capacity nature of the grievance giving rise to these groups, and the nature of these groups as well make them especially resilient to the death of a leader.

Why doesn’t leader-centric targeting strategies work? Often when we kill or capture leaders, a newer, younger, and often more violent leader takes the place. Also, most top leaders in Salafi-takfiri aren’t so exceptional that they can’t be replaced by any of a handful of mid-to-senior grade successors waiting in the wings to make their move. There are ways to improve the efficacy of so-called high-value strikes, but optimizing assassination programs is not something we discuss on the InfoMullet. And this isn’t to say we shouldn’t target leaders in military operations to capture or kill, but we need to be realistic on what the death of a leader might mean. And occasionally a leader is so exceptional and has stretched an organization’s capacity so far beyond its normal operating envelope that their death creates a real operational vacuum. This was the case in the death of General Qasem Soleimani of Iran. But this is not likely the case here with -al-Qurayshi.

What will happen next – selection of new Emir and bayat competition

As I discussed in some depth with the death of al-Baghdadi and elsewhere, what does matter is the selection of a new Emire and the opening up of a bayat competition.  In Salafi-takfiri organizations the oath of fealty, known as “bayat” plays a key role. Individual Salafi-takfiri fighters give bayat to individual leaders. The oath is normally made to life, and that means the life of the leader, not the organization they lead.

So when a Salafi-takfir leader like bin laden, al-Baghdadi or al-Qurayshi dies, the bayat every individual has given to them is nullified. And that opens up a period where these individuals can either swear bayat to the chosen successor or switch allegiance to a different leader who may or may not be in the same organization the previous leader was.
This function of bayat means the death of a major leader: such as Osama bin-Laden of Al-Qaeda or Mullah Omar of the Taliban, instigating intense periods of almost a kind of free agency. It’s as much a political free-for-all as a primary election with no incumbent. Charismatic deputies and lesser commanders can swing significant militant support between Al-Qaeda, ISIS, or other factions based on where they choose to swear bayat too. Given that this isn’t a primary with governmental oversight and death is a very real outcome of being on the wrong side – these succession crises can, when they occur, create intense paranoia, internal suspicion, and conflict over *to whom* the next bayat will be sworn.
This means whenever a major leader dies there is a period of intense churn, confusion, and opportunity in the organization they led. It was during the aftermath of OBL’s death that the bayat of ISIS leaders themselves, originally given by Al-Zarqawi to OBL directly and then by Al-Zarqawi’s inheritors such as Al-Baghdadi expired. And ISIS became a “free agent”, refusing to swear bayat to OBL’s successor they instead went their own path, splitting from AQ in 2013 under Al-Baghdadi’s leadership. When it finally came out that Mullah Omar of the Taliban was dead, Gulbuddin Hekmatyar switched sides from Taliban to ISIS in the Khorosan Province, the wilayat of ISIS covering Afghanistan and Pakistan.
However, when al-Baghdadi himself was killed by US forces, the resulting succession and bayat process didn’t result in major splits.
These bayat competitions play out over months or years. So the next thing to watch is the naming of a new Emir of ISIS, which will probably occur in the next 2-3 weeks. After that, it’s going to be a six-to-twelve month period of time, if not longer until we get a good idea of the ultimate long-term impact of the death of al-Qurayshi. That probably won’t play out on the headline news, but sites like LongWarJournal.com traditionally have good coverage and as they don’t have a paywall, it’s hard to beat free.