TLDRUpFront: Over the course of a single day President Putin of Russia officiated a “discussion” of Russian national security advisors all advising him to do what he already wanted: recognize separatist republics of Donatesk and Luhansk as independent sovereign states under threat of genocide from Ukraine. By the end of the day he had set the path to war by ordering Russian troops into Donbas as peacekeepers though the precise date of the start of conflict remains unknown. 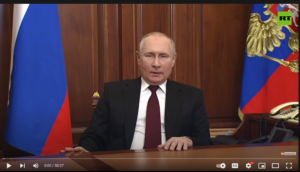 Beginning Monday Morning staged a televised national security council meeting to make a case very similar to the below for war. As carefully choreographed ‘debate’ unfoled it seemed design to bolster the narrative of the cards Putin was holding in his hand to justify invasion. Namely that:

“A Russian criminal investigation into a mass grave will find proof of genocide by Ukrainian military against Donetsk separatist men, women, and children. Putin will take this investigation result and use it as justification to recognize the independence of two breakaway Russian-speaking Republics in the Donbas region of Ukraine. Meanwhile, he will point out that even as Russia was withdrawing its military forces – Ukraine was stepping up attacks against rebels. These attacks are just the prelude to a massive Ukrainian military strike the aims of which will be nothing less than the genocidal decimation of Russian-speaking separatists. Putin will claim Russian military forces must protect the now independent Russian-speakers of the Republics, Under that pretext, a Russian invasion occurs.”

Putin’s regime officials took him on a Ptomekin village tour of every element of this narrative necessary to provide the pretext he was looking for. Observers noted that despite being proclaimed as “live” the footage was obviously taped as watches on participants didn’t match local time. The debate also had all the ambiguity of how it would end as the Oedipus play. You got the sense everyone knew where it was going. Surrounded by his own superdelegates Putin heard only what he wanted to hear and chastised those who didn’t immediately and enthusiastically toe the party line. The best coverage of the blow-by-blow debate, including profiles of the key personalities in Putin’s regime comes from the Moscow Times [1]

Later in the day, Putin gave a national address on Russian TV making his case for the invasion of Ukraine. Some key highlights jotted down of the key points (via live translator) were:
Although the speech was all over the map (literally) the idiomatic focus on “republics” and specifically the proposed genocidal threat by Ukraine seems to be leading to scenarios #2 and #5 in the six possible scenarios for Russian military escalation in Ukraine. This isn’t to say Scenario #1, diplomatic concession seeking, is off the table. This whole farce could’ve been stage-managed to gain a win, but I suspect the gears are already in motion for invasion. This sounded much more like a justification for war than a bid to negotiate.
But at the end of the day, Putin laid all his cards on the table.  After establishing the pretext for invasion and recognizing separatist independence, President Putin has ordered Russian troops to enter Donbas in order to maintain “the peace.” President Biden will respond with sanctions. No timeline of when troops will move across the line of control into Ukraine – but that’s kind of a fuzzy issue as it is now given the frozen-conflict nature in eastern Ukraine. [3]

What does this mean for China and Taiwan?

The question has been circling for a week now – if President Putin moves on Ukraine will President Xi of China move on Taiwan? I feel very different circumstances in play. Although the comparison is obvious – the logistics of executing a similar move are a lot different. Seaborne invasions into a 100% hostile territory are a lot different than building land based groups on three sides in friendly nations and being able to move forward from there into more-or-less friendly areas in the Donbas and Crimea before having to engage in conventional actions. I don’t see it as a question of nerves. When China wants to move it will move. But I just don’t think the PLA has the capabilities for those kinds of scenarios yet, though they’re working on it.