TLDRUpFront: First 48hrs of shock & awe failed to deliver a knock-out blow to Ukrainian defenders, allowing them to slow Russian advances, inflict losses, and set up defensive positions in key cities. Russia will need to grind out advances in the north. However, if Putin’s goal is gaining a land-strip in the south – and the northern offensive is just a “left-hook” strategic feint – this may be all part of the plan. 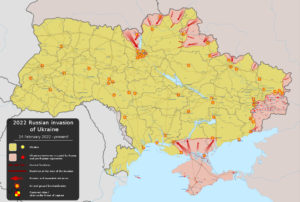 Not the opening results he was expecting.

3) Advance: Rapidly move mobile armored and infantry units to seize key objectives – demolishing any resistance that stands in your direct line of advance and bypassing isolated to cut them off.

4) Cyber: Gain dominance over the digital environment with internet blackouts and cyberattacks that disrupt opponent communications, command, and control of military operations.

Time matters in executing these five objectives because surprise only lasts so long. Given time and the ability to coordinate, an enemy can counter and slow advances, prepare defenses knowing your lines of attack and force you to fight every inch of the way.

Russia appears to have failed four out of the five objectives, only having mixed results in the first. While they have largely neutralized the Ukrainian air force – stationary air defense and man-portable air defense systems (MANPADS) continue to inflict losses of between 10-20 jets and helicopters. The shock and awe failed to counter enemy military units or sever command and control. President Zelensky can still coordinate defenses and make public appearances (crucial to maintaining Ukrainian morale) from Kiev, and most of the country still has internet sending allowing the whole world to see every Russian tank, aircraft, and soldier defeated. And there have been reported several dozen to several hundred armored units lost and between 450-2,000 soldiers killed depending on what sources. Although not coordinated as the Azerbaijan propaganda effort was in the Nagoboro-Kabora conflict– the sheer volume of imagery and video emerging can bolster defender resolve and sap aggressor morale. A quick review by region: 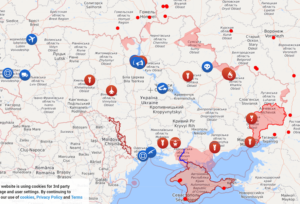 Biggest gains are in the southern strip – but even that advance has slowed.

It’s not clear what the Russian two-day strategy was here. Airborne assaults on Antonov and Hostomel airfields appear to have been opportunistic – hoping perhaps the Ukrainian military would crumble. A failed gamble – isolated and unsupported, they were overwhelmed. Also, small flying columns of a few armored vehicles were rushed into the center of the city in what appeared to be a recreation of the Baghdad ThunderRun, where US tanks stunned Baghdad by driving through the center of the town. But few they were not able to hold ground, or were actually Ukranian units mistaken for Russian – such as the Strela-10 that appears to have run over a civilian automobile in Kiev. (Whether it was manned by Ukranian soldiers or saboteurs is hard to verify.) Attacks on Hostomel airport continued today, securing parts of the airfield – but crucial time was lost.

Russian forces are still advancing from the Chernobyl exclusion zone and are beginning to fight in the outer neighborhoods to the north. But that time lost means they are facing prepared Ukrainian defenses. Putin and his generals face a choice – hold the line at a distance and use devastating fires and air bombardment to flatten defenses (and the city) or enter the city and fight block by block. The former risks escalation of intervention as civilian casualties match and war crimes are broadcast worldwide. The latter risks increasing military losses. In both Chechnya and Syria, faced with such scenarios, Putin played by “Grozny Rules” but there is no indication of that yet, whether by choice or inability to maintain air superiority or maneuver the appropriate fires support into position.

Elsewhere along the northern arc of Ukraine, despite advancing along multiple fronts– Russian forces have not rapidly advanced on any of them. In the north, most forces are getting bogged down in encircling cities like Cherniv, Khotan, Simy, and Kharkiv, rather than simply containing and bypassing them. What armored columns have bypassed these cities have primarily traveled by road – making them easy targets of anti-armor attacks and ambushes which have destroyed dozens of vehicles.

If the purported purpose of all this was to expand the DNR and LNR separatist republic borders westward to their original extent, it is not clear if that’s underway. Fighting just began today in earnest around Advika, a town bordering the existing line of control.

This is the only area where significant advances have been made – though progress has slowed today. Military troops moving out of Crimea are spreading west towards Odessa but were stopped at a critical river crossing that splits the city of Keshon. Another amphibious landing was attempted near Odessa to open a front behind the current line at Keshon, but was repulsed. Russian forces heading east from Crimea seek to encircle and surround Mariupol, which is also being attacked from the Donbas region by Russian troops moving west.

It’s not entirely clear what Russia’s strategy is in these opening moves. They seem to be making a concerted push on the capital. But that’s an odd strategy. Taking capitols hasn’t been ending wars since when the British took Philadelphia and then were surprised to realize no one cared. Plus, Kiev is a large, urban city of 3M. That’s not a city you “capture” quickly once the element of surprise is lost. With prepared defenders, it could take days or weeks to make significant gains and months to clear out all resistance.

Putin may be trying his version of a “left-hook” crucial to winning the first Gulf war in 1991. In that conflict, General Schwarzkopf made a strategic feint of a direct assault along the anticipated line of attack straight north into Kuwait. This pinned most Iraqi forces in place while coalition forces went wide into the desert, encircling the Iraqi positions in a “left-hook” and trapping them on the highway of death.

The push towards Kiev and attacks in the north may be a strategic feint. It freezes Ukrainian forces to defend the capital and major northern cities, leaving less units to move south and block Russian advances either along the southern strip or through the Donbas region.

It may also be that Putin calculated on a rapid collapse of the Ukrainian regime and its militaries. The air assaults into Kiev would make sense if resistance collapses, and it might have been worth the gamble.

Ultimately, Russia has enough forces to slowly flood them into the region, like a rising tide, swamping Ukrainian defenses.

I am not a professional – but the problem with a rising-tide strategy is that the logistical, training, morale, and discipline weaknesses endemic to Russian military forces are now starting to show. Vehicles running out of fuel, breakdowns going unprepared. Officers and NCOs cannot coordinate complex multifaceted maneuvers across broad fronts professionally. It’s not sexy – but these kinds of problems can add up and erode a numerical advantage over time.

Diplomacy is War by Other Means

What Putin can’t win on the ground he may try and grab through by making direct appeals to Ukrainian troops to turn on their political leaders, start a coup, and overthrow President Zelensky. That’s very unlikely. Zelensky won his Presidency with an eye-popping 73% and is making all the moves you’d want to see in a leader on the defense – regular appearances in the capital, showing he is in control, present, and engaged. Putin has also been trying to deter any thought of intervention by threatening nuclear responses.

Putin’s demands speak volumes. Confident, self-assured military commanders demand enemies to surrender; they don’t ask them to do their work for them by overthrowing their own militay. Global leaders confident in the performance of their conventional forces do not threaten nuclear weapons. They don’t need to – because their conventional capabilities are sufficient.

Ultimately, if Putin’s strategy was to ‘crack’ NATO it appears to have backfired. NATO is moving Rapid Response Forces into position in neighboring countries, the US is promising both increased humanitarian and military aid, and there is a mostly unified response around Europe. Of course preparedness is a result of funding – and whether Putin’s full invasion of Ukraine and attacks on Kiev spur European politicians to shore up historically underfunded defense budget remains to be seen. But it seems likely.