TLDRUpFront: Continued advances in the south mean Putin is only a few days from major operational success in connecting Crimea to Russia if Mairpoul falls. And even as offensives stall in punishing sieges in the north, only Mairpoul along with Mykolaiv and Odesa to the west keep Russia from taking the southern coastline of Ukraine. 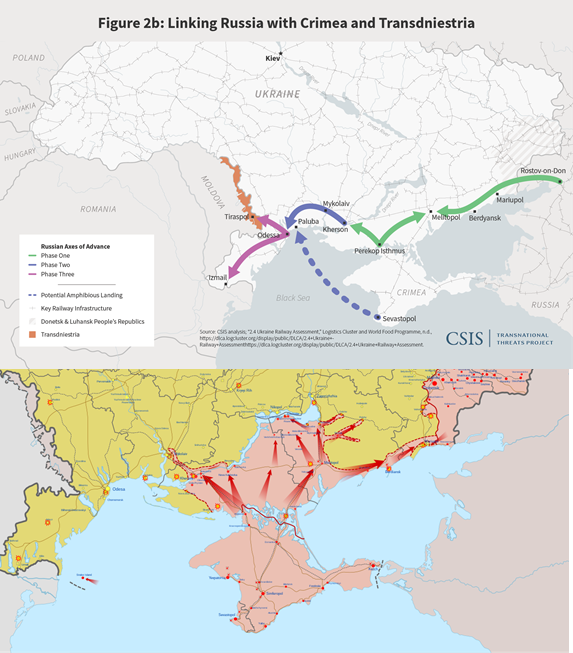 Although most western attention has focused on the north in Kyiv and northern and northeastern cities like Chernihiv and Kharkiv suffering under Grozny Rule’s sieges, the advances in the southern strip put major strategic objectives within Putin’s grasp in the next few days.

Scenario #5 of Russian invasion plans sought to secure the southern-strip of Ukraine to hold “a belt of land between Russia and Transdniestria (including Mariupol, Kherson, and Odesa) to secure freshwater supplies for Crimea and block Ukraine’s access to the sea.”(1)  This scenario by CSIS is presented in the top map of the image above, consisting of three phases:

Phase 1:  Breakout of Crimea to connect with the Rostov-on-Don to the east through Mariupol and advance onto Keshon securing freshwater access through the North Crimean Canal.

Phase 2: Take Keshon, advance through Mykolaiv, and take Paluba by land or sea to advance on Odesa.

Phase 3: Seize Odesa and advance to the city’s northwest to connect with Transdniestria and southwest through a now isolated southern portion of the Odesa Oblast to seize Ismail.

President Putin and his military generals stationed as many Brigade sized combat units in Crimea as they did in the path towards Kyiv, and from anecdotal observation, the troops are better equipped, better trained, and have higher morale than those in the north. These southern units include battle-hardened veteran units with experience in Syria and Georgia.

This combination has allowed Russia to accomplish most of Phase 1 and parts of Phase 2 even as advances in the north stall. Russian military forces completed the Battle for Keshon on March 2nd, allowing them a foothold to advance across the Dnieper and begin battling for Mykolaiv. Moving north out of Crimea, Russian forces have secured the North Crimean Canal(2) to ensure freshwater for Crimea by taking all of Keshon Oblast to the south bank of Dnieper. Included in this district are the strategic town of Enerhodar and the Zaporizhzhia Nuclear Power Station, almost resulting in a catastrophic incident last night as shelling hit the plant, setting the facility on fire. (See below). For readers unfamiliar with this region, the Kehson Oblast holds 1M citizens, and Keshon was a city of over 200,000.

Crimean forces could also break out and advance on Mariupol from the west as other forces came out of the Rostov-on-Don. Mariupol, twice the size of Keshon or close to 500,000 people pre-invasion, is now surrounded, running low on supplies and calling for reinforcements. Using Keshon, as a case study, without military reinforcements or relief Mariupol may fall over the weekend or early next week. (3) If this happens – President Putin will claim major operational success in connecting Crimea to Russia via Rostov-on-Don and the DNR statelet.

The capture of Mykolaiv over a similar period will allow Russia to advance on the final southern outpost – Odesa. And it prepares Russia is preparing to attack the port city from land, air, and sea. The image below shows a large assembly of Russian landing craft stationed off the western shore of Crimea, just across the Black Sea from Odesa. The size in the images are deceiving – each is capable of holding several dozen armored vehicle and several hundred men. However, invading Odesa from the sea is complicated and hazardous (See Twitter thread for analysis on Russian amphibious landing capabilities (4)). Russia may be holding this force as a pinning action to keep forces in Odesa in place so they cannot support Mykolaiv. Or it may hope to use this force to land forces south of Odesa if their land forces can attack Odesa from the north via Mykolaiv, similar to McArthur’s surprise landing in the Korean War under Operation Chromite. (5)

Overnight a Russian attack on the Zaporizhzhya nuclear power plant (NPP), located on the southern bank of the Dnieper river north of Melitopol, resulted in damage and fire at the facility(6,7). Although the reactor itself didn’t catch fire, a training building at the facility did. The attack appeared to pause only long enough for the fire to be extinguished. The IAEA got involved, and radiation limits are within normal bounds according to both the local plant manager and Ukrainian State Emergency Service. (8) 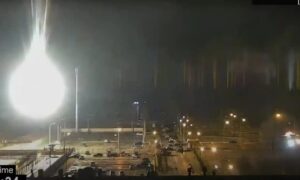 Attack on the NPP

It was unclear if the plant was intentionally targeted to damage it or collaterally damaged due to fighting in the area of nearby Enerhodar, a strategic city on the Dnieper. In addition to controlling access to the largest nuclear power plant in Ukraine, if not Europe, Enerhodar has strategic coal power plants and controls powerlines that cross the Dnieper. It is also located directly across the river from Nikopol, a major industrial hub for Ukraine. Both Enerhodar and the NPP were seized by Russian forces by Friday morning (9).

Targeting nuclear power plants to advance military objectives is a new development in this conflict not seen in more recent, asymmetric fights or countries without nuclear infrastructure. After some research, both the US and Russia see NPPs as valid military targets, though there is an ongoing debate on the legality of such actions under Protocol 1, an international rule violating such attacks. At least in the US, part of the military calculus is to use the same considerations of proportionately and creating undue risk to civilian populations as other attacks. So intentionally attacking a plant to harm civilians would be off-limits, but attacking one seizes it and cutting off power supplies would be valid(10).

At the outset of the invasion, Russian forces attacked Ukrainian defenders at the Chernobyl nuclear plant to gain a surprise route south directly towards the capital Kyiv in an unexpected advance. This allowed them to avoid invading on the east side of the Dnieper, which would’ve required a river crossing under combat or circling far to the west on a longer route. Also, because the Chernobyl Exclusion Zone is unpopulated, there is less resistance to their movement.

Even if not intentionally attacked to damage or destroyed, merely fighting around these power plants with conscript troops presents a new dimension for EU/NATO partners. The risk of a catastrophic nuclear meltdown has ramifications far beyond Ukrainian borders. But at least as of today’s NATO meeting, the military defensive alliance remains committed against intervening in the Russian invasion of Ukraine(11). Either by inserting land troops or creating of a no-fly zone to enforce or support humanitarian corridors being negotiated by Russian and Ukrainian diplomats.

Will the Southern Strip Be Enough?

Securing the southern strip from an outsider’s perspective would allow Putin to approach ceasefire negotiations with facts on the ground to save face and what has been a punishing invasion both on the Russian military and its economy. I’ve mentioned previously that regardless of what ground Putin holds via occupation, that is not the same as pacifying it from insurgency which may take years. And it’s uncertain whether President Zelensky would, or even should, countenance the surrender of Ukrainian territory to end the war.  There’s also the possibility that Putin pushes until he is stopped, which is his modus operandi. With Grozny Rule sieges surrounding the largest cities of the north, absent NATO intervention, it would become a brutal war of attrition between which collapses first: Ukraine or the Russian elite’s confidence in Putin as its economy, and maybe even entire ability to administer governmental functions over a vast and large nation crumble.