TLDRUpFront: Western narratives of an imminent military collapse are misleading as Russia demonstrates the continued ability to maneuver large, combined-arms forces. These are taking up “belts” position around Kyiv, cutting off northern cities, and continuing to steady advances on multiple fronts expanding the Russia-Crimea land corridor. 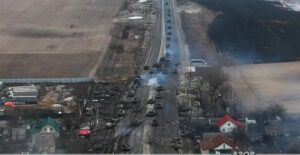 There are no large, combined-arms, armored Russian columns east of Kyiv.

Focus on the “40-mile convoy” north of Kyiv and Russian challenges as indications of imminent collapse are grossly misplaced. What had been a traffic jam now appears to be coalescing into a 40mile Russian forward staging base. Battalion groups operating in this area each have their area and give less the impression of the “Highway of Death” rather than a Russian Bagram Airfield staging area north of Kyiv. Just as Bagram served as a massive staging area for US operations in the north of Afghanistan, just north of Kabul. A staging area like this allows Russia to support a variety of options in Kyiv: an assault, siege, Grozny Rules, or belts strategy described below.

The Belts of Kyiv

Taking large cities in modern warfare is not done in days but rather weeks and months of intensive fighting. Failing to capture it in a lighting advance triggering collapse, as the US did to Baghdad in 2003, can lead to costly assault and clear operations as the US had to undertake in both Fallujah I and II. In Syria, a general uprising in Homs and Aleppo took years for Assad, with Russian assistance and Grozny rules to subdue. In 2017, a small force of several hundred ISIS/Abu Saayaf insurgents was able to take the city of Marawi in the Philippines by surprise assault. It took five months of effort and thousands of troops to get them out, destroying large parts of the city. (1) As difficult as all those fights were – they were all against insurgents or civilian resistance who could not match firepower – let alone in the case of Ukraine often exceed technical competence.

What is a “belts” strategy?

However, an alternative to assaulting a city is something called a “belts” strategy. Named for the “Belts of Baghdad”(2) strategy originally envisioned by AQI’s al-Zaqawri in 2003-2006 to threaten Baghdad, its goal is not to seize the city in a traditional sense that we think of from World War II. Instead, militants occupy the “belts” of modern cities: the suburbs and exurbs that stretch out for dozens of miles from the city center. 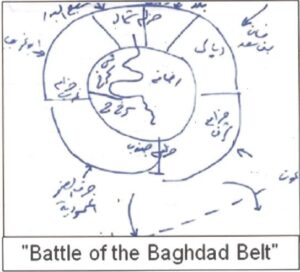 For militants occupying the belts gives them a position to send in crude fires: suicide bombers, car bombs, and planted IEDs into a city. For conventional armies, artillery fires, drones, and rockets are used. The goal is to create collapse conditions quadrant by quadrant in the city, and only as each quadrant collapses, do forces move in, akin to tightening the belt.

AQI was not able to succeed in this approach Baghdad in 2003-2006 out of a combination of US counter-insurgency efforts aided by the Anbar Awakening where Arab Sunnis turned on AQI. But the strategy continued to be employed in both Iraq and Syria by state and non-state actors alike. Notably, in the 2014 Anbar offensive, as ISIS broke out across the country, it stayed on the outskirts of Baghdad and sent in numerous car bombs, including massive attacks we’ve mentioned elsewhere. The goal for ISIS was to trigger ethnographic side-choosing, splitting Arabic Sunni and Shia groups into the kind of neighborhood-level bloodbath during the Iraq war before the defeat of AQI in 2007. This was unsuccessful in 2014 as the Baghdad population rallied in the face of ISIS in a Patton “I read your book Rommel” and refused to fracture. (Divisions would return after ISIS’s defeat.) The strategy was successfully used against ar Raqqah by the US and Kurdish SDF forces in Syria and again against Mosul in Iraq by a combination of US, Kurdish, Iranian and Iraqi.

Giving evidence of this Belts approach are Russian combat units maneuvering to the west and southwest around Kyiv from the staging area north of the city. (3). These movements are large and can reach as far as 30km southwest of the city. (3) Combined with Russian advances from the east towards Kyiv into the cities eastern belts (described in a second update today), Kyiv’s only remaining uncontested belt lies directly to the southeast of the city. Geography favors Kyiv on either encirclement or a belts strategy. The Dnieper runs through Kyiv, and the capital benefits from internal lines of support, allowing it to move forces back and forth across the river easily. Absent restoring blown bridges or conducting river crossing, the Russian forces on either side are not as able to support one another, potentially leading to a “Benny on the wrong side of the river” Mummy moment(4). 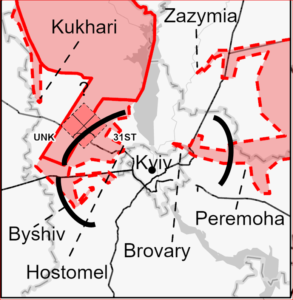 A Belts strategy is similar, but not the same as a true sieging encirclement. In the latter, all routes of supply have to be cut off. The goal is to force internal collapse. But in a belts strategy, the goal is to preserve troops and fires into the city, forcing the enemy to come out or counter-attack into prepared positions. Insurgent groups hope for ethnographic fracturing in the city to give them a route in.

In Ukraine, any hope for Russia to create ethnographic fracturing between Ukrainian-speaking and Russian-speaking groups seems lost, if ever there was a chance, due to Grozny Rules. However, a “belts strategy” does support a Grozny Rules approach to demolishing the city. And it may support several Russia’s mid-game scenarios that I’ll share later today. It’s a strategy that leaves a lot of options open, while also not being as risky as an assault into th ecity.

In the northern front(5), it continues to be a mixed battlefront, but Russian forces are slowly gaining the upper hand. The city of Chernihiv, population ~300,000, has had its lines of communication with Kyiv cut by Russian forces encircling it. A line of communication is the route that connects a military unit with its base of supply. In an abstracted sense, it is the basis of the game of Go. Closing it off is a dire situation – without the ability to resupply ammunition, food, oil, and other logistics can’t reach the military unit, and it must rely on whatever stocks it has on hand. Depending on the size of those stocks, this could be hours, days, or weeks. Cutting the line of communication in an abstracted sense is the focus of tactical play in Go, surrounding an opponent’s formation cutting it off from enough “eyes” of support, and the pieces are lost. 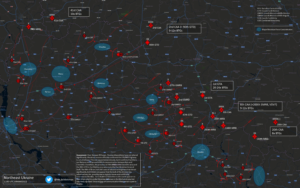 Chernihiv, which has been under attack almost since the first day of the invasion, is now in the same status as Mariupol. Two major Russian advances towards Kyiv have accomplished this, one force moving south from Chernviv along the E-93/95 highway and another advancing westward from Sumy along with the H07 as shown in the Northern Front Maneuver Map below:

Drone footage from Brovary(6), just east of Kyiv, gives visual evidence of the mixed signals these advances convey. First, unlike previous thunder runs of small unsupported detachments, the image shows a large combined force including armor, motorized infantry vehicles, artillery, and anti-air support. These are the kind of maneuver formations we’ve been expecting all along. And to get from where they started in the north northeast to Kyiv takes more than a tank of gas – indicating supply lines are still up and running for Russia 15 days into the invasion. On the other hand, the video associated with the image shows how Russian poor maneuvering (such as clustering up on a single road) can invite what is either Ukranian retaliation. Though losses aren’t clear from the video (apparently the voiceover claims “complete loss” which must be taken with a grain of salt), the attack raises a valid question of how Russian training for combined arms operations are going to allow them to exploit these operational advances with tactical competency at the tip of the spear.

This is key because cutting a line of communication, however, is not the same as accomplishing a military defeat let alone an occupation or pacification of territory. There are still many Ukrainian units operating between Sumy and Chernviv, and the Russian advances risk being cut off themselves if unsupported. Indeed I can’t help but look at maneuver maps like that and not see a Go board.

Russia has the benefit of controlling the northern side, which means it has more routes for supply into the northern arc. The conflicts in the northern arc around Chernihiv, Nizhyn/Mena, Konotop, Shotstka, Sumy is a messy joseki (tactical) fight of maneuver and counter maneuver in contact coming out from that side. Kyiv is the strong formation in the center of the board. The advances along E-93/95 bring troops to encircle Kyiv from the east and threaten to encircle this “messy” fight into a general condition where none of the Ukrainian units can be resupplied. It may only be a few placed stones, and Ukrainian counter attacks may remove them, but Russia has more stones to place and unless forces from Kyiv move out from the city (which is unlikely) or the Ukrainian forces in the north succeed in their current conflicts such they can turn south.

As the update on March 8th focused on, Russia continues to advance and create depth along a southern land bridge that connects Crimea to Rostov-on-Don. In Kershon, Russian OMON(7) units are being brought in for riot control.   OMON is a division of Russian special police and specializes in riot control and other light troop paramilitary duties. (8) Their introduction to Kershon shows that Russia intends to occupy and pacify the area in the intermediate-term. 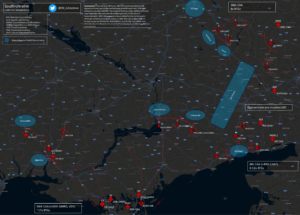 East of Kershon(9), the Russians have indeed advanced towards Zaporizhia and east from there to contest the N15 highway line. As this force moves into the Ukrainian LOC forces rear, separatists have staged their first serious attack westward across the line of control, though their success isn’t clear depending on whether you’re reading Russian or separatist dispatches(3).

In west, Russia continues to attack Mykolaiv, whose capture will allow it to advance to Odesa by ground. But the same rising tide effect in play on the northern front is beginning to occur here. When Russian advances are blocked by hard points such as Mykolaiv, Russian military units contest the hardpoint while other follow-on forces flow around them to advance in new directions. While preparing to attack Mykolaiv, Russian forces have advanced northwest to Vozensky, where they are opposed, and even northeast along the N11. These may be stones being placed in knight-moves on the Go board, but any stone which cuts or threatens the lines of communication for Ukrainian forces, even if just for a few days, has consequences.

Overall the assessment of many western media of an imminent collapse of the Russian army seems to be overstated. The invasion has not gone to plan, logistics may be a mess, and Ukraine continues to inflict losses. But Russia continues to maneuver elements on all fronts of the theatre, and many of these forces are beginning to isolate and cut off Ukrainian positions. That’s only part of the equation, of course – a surrounded force still needs to be destroyed or capitulate, and with cities that may take weeks or months. More on the mid-game scenarios for Russia in a later update today. 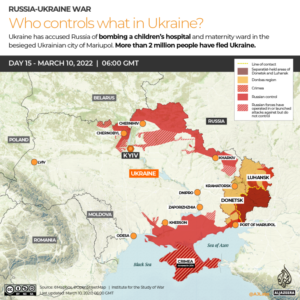