TLDRUpFront: Part 1 of 3 of the mid-game assessment likens the Ukraine battlespace to a game of Go beginning the mid-game, including analysis of Russian and Ukrainian material losses and total force investment by Russia into the current conflict. 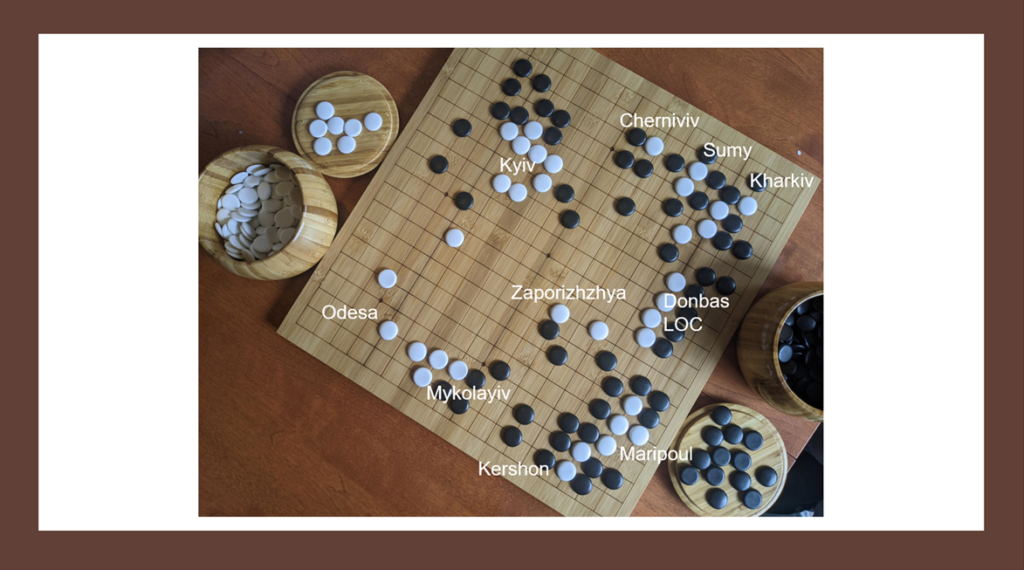 The board at mid-game.

Western observers consistently misread the Russo-Ukraine war by imagining Russian forces as either 12′ or 4′ tall and applying 20th Century battle analysis to a 21st Century conflict. This post is the first of three parts of an assessment of where the war stands, now leading to a forecast of five scenarios of where we go from here through mid-May in part three.

To jump to part 3 and see the five scenarios click here.

Opening, Mid-Game, and Endgame in Go

In Go, there are three recognized phases of any game. The opening game is where opponents use tactical contact fights (joseki) to secure corners and sides. A mid-game mixing joseki follows the opening and strategic moves (fuseki) moves to advance from these secured sides and corners into the center of the board; and finally, an endgame which involves finalizing the lines of control and securing territory. The pacing and stone movements are rapid and furious in the openings, the pace slows in the mid-game, and the end game is often very detail-oriented.

As the phases progress, initiative control is determined by which player is acting and who is reacting. If you play a stone, and your opponent has to react to it, you are in sente, and they are in goete. Instead, they ignore that move and play a stone elsewhere, requiring you to respond, the initiative has shifted, and they have taken sente putting you into goete.

During these phases, you can surround enemy formations, cut them off, and capture them in certain circumstances. This is similar to the military concept of cutting the lines of communication described in a previous update:

A line of communication is the route that connects a military unit with its supply base. In an abstracted sense, it is the basis of the game of Go. Closing it off is a dire situation – without the ability to resupply ammunition, food, oil, and other logistics can’t reach the military unit. It must rely on whatever stocks it has on hand. Depending on the size of those stocks, this could be hours, days, or weeks. Cutting the line of communication in an abstracted sense is the focus of tactical play in Go, surrounding an opponent’s formation cutting it off from enough “eyes” of support, and the pieces are considered.

But because of the way Go works, you don’t have to clear off dead positions. Situations arise where there is no way a position will recover barring catastrophic mistakes by the other player, and there are better moves available on the board to play instead. So, the ‘dead’ stones can stay on the board, giving an illusion of being in play, even if they aren’t recoverable. In the above map, the stones of Kershon and Mariupol are still on the board, but they exist in unrecoverable positions. The cities in the north aren’t lost yet but are very close to being surrounded similarly.

The Board at Mid-Game

Two weeks after the invasion, it feels that the war has moved into its mid-game. As the invader, Russia had sente for seven hours on February 24th before their opening game fell to pieces. The first full week of the invasion almost felt like a mulligan – an extremely bad opening from Russia.

But it seems like Russia has taken sente back as it moves into the mid-game. They have gained positions in key sides and corners: the Chernobyl exclusion zone in the north is a corner; Crimea is a southern corner; Donbas and the line of control is an eastern side, and the northern arc is the northern side. Russia has advanced from the southern corner to create a land corridor running from Rostov-on-Don that connects to Crimea and Mykolaiv. They are advancing on Zaporizhzhya and threatening to cut off the Joint Forces Operation (JFO) units – a major body of Ukranian military that sits across the line of control from separatist occupied Donbas. People may think Go is too abstracted a game to use in evaluating a battlespace like Ukraine. But comparing a Go cutting-strategy on the board with a more detailed map based on UKR General Staff releases shows how, at least for the JFO, the encircling strategy of the Go board is a real concern(4).

Encirclement of the UKR JFO Forces (blue oval) is the largest current risk on the Go board and in Ukraine.

Ukraine still holds a strong position in the southwestern corner in Odesa. The west of Ukraine is largely unaffected except for occasional missile and rocket strikes. They have surrounded the northeastern cities and taken up position on the belts of Kyiv – but these formations are not eliminated yet.

One of the odd byproducts of this Web3.0 or TikTok war is the ability, in near live time, to create counts of materiel losses on either side from the most unlikely combination of sources. A military blog website, Oryx(1), has been taking every posted video or image of a damaged or destroyed asset, identifying it’s type, geotagging it’s location and time, deconflicting the results and assembling regularly updated materiel losses for Russia and Ukraine. Another user took this information and created a GitHub space for analyzing it posting regularly updated charts comparing not just total, but proportional losses and loss ratios. The results are charts below that would be the envy of any military assessment, with a few glaring caveats.  I’m only showing a few charts here and recommend visiting the original provider for visual images and lists of all losses(1) or the GitHub source for the chart visualizations (2).

The first set of charts maps the loss of tanks across three different views. On the left, the absolute losses by number, in the middle the proportional loss relative to the amount of tanks in the theatre for each side, and on the right the proportional loss relative to the total number of tanks available to each side.  For Ukraine, the center and right numbers are the same, the theatre is their country and all available tanks are “deployed” in the battlespace. However for Russia, the right hand chart represents it’s ability to bring tanks forward from other areas of Russia via rail transport into the theatre.

The left two speak of the disparity of losses, both by absolute count and % deployed in theatre, Russia is suffering. This is one reason my forecasts in Part 3 are limited in nature. Russia has struggled to advance in many areas through these losses and therefore original scenarios, such as conquest of all of Ukraine (which I always found unlikely) are now thoroughly off the table.  The right hand chart however represents the dire situation Ukraine is in as this fight continues.  It’s the Thatcher-IRA problem; if Russia is able and willing to resupply equipment from elsewhere they can afford to be wrong many times, where Ukraine can’t afford to be wrong once. And the loss of the JFO at risk near the Donbas LOC is just a scenario where Ukraine may suffer such a defeat.  Although this chart displays tanks, similar charts can be found on the GitHub source(2) for other types.

The second chart shows an overall loss ratio between Russia and Ukraine by type of loss: destroyed, abandoned, or captured. These charts speak to the asymmetry of losses and velocity of losses to the above charts: if Ukraine is only losing one unit destroyed for every four Russian units it destroys, that’s going to continue accelerating the trend above.  Likewise the ratio of abandoned and captured can be used as a very rough aggregate of logistics support. A vehicle out of fuel or ammunition is more likely to be abandoned than one with. However, keep in mind is that these bar charts are a snapshot in time, so every time the snapshot is taken the ratios may change, check the Twitter for more recent releases(3). 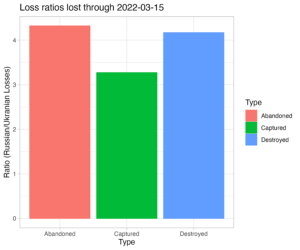 The higher the abandoned loss ratio – the greater impact logistics is having.

And the final chart is a loss ratio by type of unit. This one really drives home what appears to be a Ukrainian strategy not of targeting the fancy “combat” units of tanks, artillery, and APC’s but prioritizing the unsexy but vital logistics vehicles that make all those combat arms go. (As a caveat it could also represent a disparity of Logistics equipment between the two sides or lack of reporting of logistic vehicle losses by Ukraine…probably a mix of the two.) 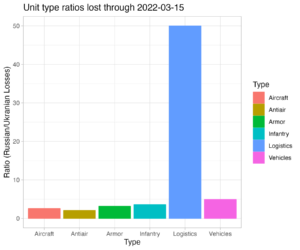 The caveats here is that all of the information is coming from open source intelligence (OSINT) and with Ukraine IO vastly exceeding Russia this creates a very skewed view of combat results.  There also seems to be a Slava Ukraini gentlemen’s agreement not to post or share Ukrainian force movements or losses by many, which when combined with UKR IO strength means we get a very skewed view of combat results.

But a last takeaway on these lost stones is that President Putin has committed 60-80% of his entire ground forces to this engagement in Ukraine. The chart below puts into perspective the sheer size of this military engagement relative to other recent Russian and Soviet military campaigns. As mentioned in the original six scenarios:

“Although all of Ukraine is at risk from Russia, all of Russia is at risk for Putin if he gambles his army and it falls apart or gets bogged down into a protracted fight with Ukraine.” 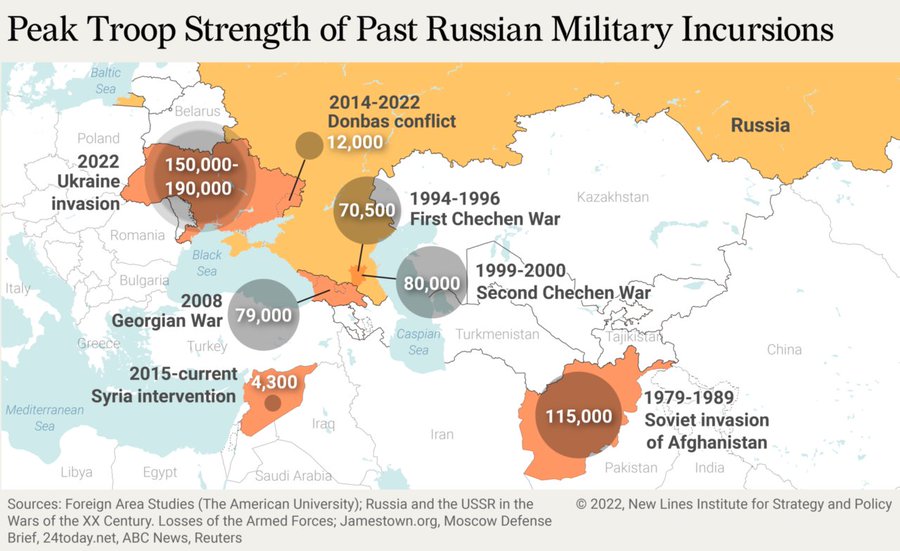 Putin is pushing most of his conventional chips into his gamble in Ukraine.

The implication of the losses Russia is sustaining in Ukraine, even if they should prevail in one of the five scenarios during the mid-game are profound. This war will cripple Russia’s conventional readiness for years to come – and the foreseeable and unforeseen consequences of that may be staggering to President Putin’s ambition, the Russian people, or even the integrity of the nation of Russia.

The trick with Go is that although the immediate objective is to surround and take enemy formations, much like cutting their line of communication as discussed yesterday, it is controlled territory that is counted at the end of the game. Not stones on the board or prisoners in the bowl, though these have relations to score, territory counts.

It’s easy for beginner Go players to get distracted by the play of stones, the urgency of keeping sente or getting out of goete, and avoiding prisoners being taken that they can forget – at the end of the game, it’s all about territorial control.

And this is the error of much western analysis. Caught in the day-by-day movement of troops here or there or the torrent of video content of individual stones, we aren’t seeing the whole board. Ukrainian domination of information operations means we’re getting only one part of the story. It’s hard to see what formations that still actively fight are already lost, which ones are at risk of encirclement, and we’re certainly not seeing territorial gains because there are still opposing “stones” on it, even if they’ve already lost.

Of course, comparing Ukrainian battlespace to Go is an analogy, and all analogies have limits. The game of Go doesn’t consider logistics, muddy roads, or OG Grandmother Sunflower Seeds.

Part 2 of the series covers some of Russia’s strategies in the mid-game.