TLDRUpFront: HR6869 seeking to authorize Letters of Marque to seize Russian oligarch assets is proposed by an attention-seeking legislative Cartman, functionally ineffective, Constitutionally prohibited, and beyond that not a good idea. Other than that how was the play Mrs. Lincoln? 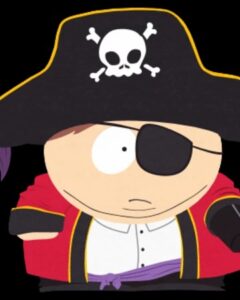 Representative Lance Gooden (R-TX) sponsored what amounts to the “White Claws” legislative response to the Russian invasion of Ukraine. By that I mean if your legislative record involves voting against impeaching President Trump for extoring Ukraine with Javelin military aid arguing it’s better “waiting for the next election”(1), who then sought to undermine and subvert that election first in court (2), then during the electoral college count after the insurrection(3), and refused to honor the Capitol Hill police who bled to protect him(4) maybe popping a can of White Claws-against-Russia(5) will pivot your brand from something other than a Stalinist. Keep in mind this is a Representative too dumb to know the difference between “Yea” and “Nay” on the House voting buttons (6).

But, putting aside that this proposal is DOA and has received zero support(7) analyzing it from an effective function, Constitutional, and risk standpoint…

As a matter of effective function, incentivizing private enterprise to go out and do national-security military stuff on promise of booty was long ago replaced by incentivizing private enterprise to go out and do national-security military stuff by that sweet Federal contracting dollars. And I can’t believe I’m saying this, DoD contracting has better infrastructure for oversight and control against abuse.
Putting functionality aside, despite Letters of Marquee being Constitutionally permissable, the structure of Representative “Pushed Wrong Button” Gooden  is that there is a different section of the Constitution that would prohibit this law. Under Article I Section 9 Clause 3 Congress is prohibited from passing any bill of attainder, which is something that inflicts “pains and penalities” on any -individual- absent judicial proceedings. And Gooden’s legislation refers to a specific list of individuals, rendering it self-defeating under a Constitutional test. The Constitution’s language on prohibiting Congressional passage of Bills of Attainder is unequivical, “shall not pass” and unmoidified by any qualifiers such as “against people/citizens” or contravening powers listed elsewhere in the document reserved for Cognress. It’s not just Congress, States themselves are prohibited under similar wording of Art I Sec 10. (Sorry Texas!)
This raises a fair question: if Congress can’t pass Bills of Attainder how are Russian oligarchs under individual sanction by the President? That’s because the President is not prohibited under the Constitution and Congress has provided him prior legislative approval to enact a framework of sanctions, and the President is operating within that framework. But this wrinkle is one reason why historically when we have issued Letters of Marque (and we have) it’s against a nation-states assets (e.g. French flagged ships) and not specifically named individuals.
As a final analysis, putting aside all of the above, the history of US conduct by vigilantism of any form does not present a good track record of getting after the enemies we want, and not inadvertently hitting the people we don’t want to hit. If I were to wager between a bunch of “hey ya’ll watch this” types going up against oligarchs who leveled themselves on surviving Putin, I’d bet on the oligarchs. And the byproduct of that is I think the casual crowd would probably down-select to easier targets, that aren’t necessarily the oligarchs or even associated with Russian regimes. We already have a hard enough time with harassment of US citizen owned and operated “Russian” restaurants and other businesses, I can only imagine some pack of loitersacks trying to break in the doors and steal the pallet jack flying a Jolly Rogers.
In theory, over time, groups *could* organize themselves to have the kind of capabilities to identify, seek out, and confront sophisticated oligarchs and their own security (legal, economic, and force based) protections. But to the extent those groups do and currently exist, their chasing those sweet-sweet CP+FF DoD contracts more than they’re likely looking to take their chances on reality-tv show turned reality Operation Repo or something like that.