Home  »  Domestic Affairs • Lightly Sourced Commentary   »   Radical Moderate #3: Shall be protected by a substantive due process.
Spread the love

To read the Manifesto of a Radical Moderate, click here.

TLDRUpFront: No State has a right to Tyranny. In overturning Roe v. Wade Alito’s reasoning contains a fatal flaw jeopardizing the People’s liberties and powers by eliminating substantive due process protections. This puts both safe healthcare for women and many other liberties in jeopardy. 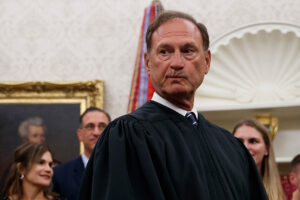 For substantive due process incorporation before he was against it.

As a Radical Moderate, we begin with the premise that no State has a right to Tyranny. The first principle of limited government is that no level of government: local, county, state, or federal, should unduly burden, without cause or reason, the liberties of the People. The People are sovereign, and in ratifying the Constitution, they created a limited government reserving for themselves liberties, powers, and privileges that any government could not, should not, and must not abuse.

9th: The enumeration in the Constitution of certain rights shall not be construed to deny or disparage others retained by the People.

10th: The powers not delegated to the United States by the Constitution, nor prohibited by it to the States, are reserved to the States respectively, or to the People.

The founders knew there were liberties and powers they did not have space to articulate or that may arise from future progress. Obviously, a tension arises in the 10th Amendment of how to determine which “powers” fall to the States and the People. The 14th Amendment resolves this tension in Section 1:

No State shall make or enforce any law which shall abridge the privileges or immunities of citizens of the United States; nor shall any State deprive any person of life, liberty, or property, without due process of law; nor deny to any person within its jurisdiction the equal protection of the laws.

To summarize, the Constitution did not enumerate all actual or potential liberties or powers. It reserves unstated liberties to the People and unstated powers to the States or the People. When the powers of the States or People came into conflict, “due process” was a burden placed on the States. Not on the People. The burden is substantive rather than procedural. Procedural due process narrowly protects specific persons in their legal proceedings from the unjust application of Constitutional laws. Substantive due process broadly protects the People against an unconstitutional law, of which no trial could be just.

The fatal flaw in Alito’s reasoning is to reinterpret the 14th Amendment by limiting it to explicitly stated rights within the first eight amendments to the Constitution or those “deeply rooted in the nation’s history.” His mechanism to establish “deeply rooted” is to examine whether abortion was a historical practice at the time of the founding 14th Amendment or at the time of Roe v. Wade ruling. Finding that states banned the practice – he determined abortion had no deep historical tradition.

Both a plain reading of the Constitution and a review of practical applications of these concepts make this fatal flaw clear. Of the first, nowhere in the US Constitution, nor in any amendment is there a reference to tradition, history, or prevalence of liberty or power. There is no language that recognizes our liberties only if they existed at the founding, the 14th Amendment, or at the time when a court makes a ruling on our liberties. Justice Alito has “read into” the document those words. Additionally, if the 14th wanted to restrict the States to the first eight amendments, or a traditionalist review, it would’ve stated that. In contrast, the 14th Amendment references “liberty” in the same context as the 9th Amendment does. And the word “powers” means “privileges and immunities” which references the 10th Amendment. The clear reading of the 14th is to put a substantive burden on the States infringing upon unenumerated liberties and powers reserved for the People in the 9th and 10th Amendments.

Second, in practical application, there was no deeply rooted national history of universal suffrage of free male citizens without property qualification prior to the Constitution. Nor is the liberty of being able to vote without paying taxation stated anywhere in the Constitution, nor even implied, until the 24th Amendment. And yet the Constitutional ratification occurred through universal suffrage of free male citizens without property requirements. That suffrage has only expanded over time. Nor did a defendant have a right to take the stand in the Constitution or in any State Constitution at the time of Ratification. At the time of the 14th Amendment, only one State offered that right. And yet now the right of a defendant to take the stand is so ubiquitous many mistakes it as an enumerated right. Finally, in Loving v. Virginia, the Supreme Court overturned laws that prohibited marriages between people of different races. There is no mention of marriage, let alone mixed-race marriage in the Constitution nor was there a recognized right in the 14th Amendment to marriage. And clearly was not a ‘deeply rooted historical tradition’ of mixed-race marriage. At the time of Loving v. Virginia, nearly a third of all states banned the practice.

Alito tries to defend against this critique but falls into a pit of his own making. He argues that at the time Supreme Court acted there was some preponderance or prevalence of recognition of these other liberties or powers. For example, even if 1/3rd of the States banned miscegenation, others allowed it in Loving v. Virginia so it satisfies a “deeply rooted historical tradition.” When Roe V. Wade was ruled, almost all States banned abortion.

The pit is this: at the time of Roe v. Wade seven of those states no longer enforced their bans. At the time of Dobbs v. Jackson 16 states and Washington DC. explicitly protect it. And the population of those states makes up a near majority of the country. By an absolute count, more people exist in these States that explicitly protect abortion than existed in total across the country at the Ratification, the 14th Amendment, or even at the time of Roe v. Wade. By what measure does Alito judge that there isn’t currently a 50-year widespread tradition of the right to an abortion? Even excluding those states which made explicit moves against abortion – to argue that there isn’t a good portion of the People who enjoy this right and thus it has no legal basis exposes the absurdity of this traditionalist standard. It imagines an unstated mathematical formula of preponderance applied at arbitrarily chosen periods of time to determine the sufficiency of the existence of liberty prior to formal recognition they exist.

This isn’t the only fatal flaw in Alito’s reasoning. Others have and will bring up the specific nature of healthcare rights and the agency all people, including women, have over their bodily autonomy as it relates to abortion. There’s also a solid legitimacy argument that a super-majority of the Supreme Court gained through capricious and arbitrary manipulation of judicial nomination processes in favor of partisan politics does not lend credibility that the court has the mandate to make this call. Those are valid critiques as well. But this particular fatal flaw in Justice Alito’s opinion exposes an extreme danger, if left unchallenged, both to abortion and the entire notion of substantive due process protections on our liberties and powers. Justice Thomas already made this clear in his concurrence that gay marriage, consensual sex, and contraceptives can be targeted by this ruling.

But there are more liberties and powers we the People take for granted than Thomas can name endangered by this ruling. Liberties and powers neither enumerated in the Constitution; nor recognized broadly at the time of the ratification; of the 14th Amendment; nor at any arbitrarily selected time point in between. Indeed, it is the functional purpose and explicit construction of the Constitution of the 9th, 10th, and 14th Amendments to protect unenumerated liberties and powers, from both Federal and State governments, with a substantive due process burden from depriving our life, liberty, or property.

Because no State has a Right to Tyranny.