TLDRUPFront: A quick backgrounder on former Japanese Prime Minister Shinzo Abe who was assassinated on a campaign stop in Japan Friday. FullContextInTheBack: At about noon local time Friday in Japan the former Prime Minister of Japan, Shinzo Abe, was shot twice by what authorities are calling a home-made shotgun by a 41-year-old former member of
Read More 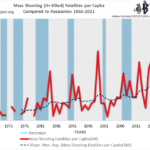