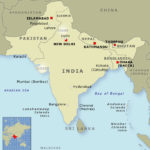 2020AMA Forecast to the Question: What areas are ripe for civil unrest internationally in 2020? What factors are feeding the potential conflict and how might it play out?
Read More
2020 AMA Forecast in response to the Question: What will the significant players in the Middle East: Turkey, Iran and Saudi Arabia gain or lose in 2020?
Read More
New Year’s Eve 2019 Forecast (What’s this?) I predict no loss-of-life related to an attack on a US Embassy or Consulate in 2020 and a second forecast of no “significant attacks” (e.g. Benghazi style.) There may be protest actions aplenty, but targeting US Embassies and Consulates, especially post Benghazi is just bad idea theatre. Counter
Read More
New Year’s Eve 2019 Forecast (What’s this?)   I think what’s obvious, and overstated, is the downside risks to the European Union. It’s easy to be bombarded by Brexit news, as well as other separatist and Eurosceptic movements in France, Spain, Hungary and others and think that the EU is struggling or has a dim
Read More