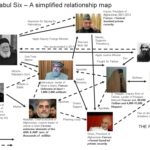 TLDR: The Afghan capitol of Kabul has reached the tipping point where conditions are ripe for a coup within as little as a few weeks. In the most likely scenario Abdullah Abdullah, the second highest politician in the country would seek the ouster of President Ghani. Understanding the conditions requires understanding the ethnographic factions
Read More
Buried under the lede of this article is some rather bad news about leadership recruitment by ISIS: “U.S. and Afghan officials say ISIS is now in three provinces in Afghanistan, **and over the weekend, Afghan warlord Gulbuddin Hekmatyar announced he would support ISIS.”(1) For those who might not recognize the name Gulbuddin was one of
Read More