TLDRUpFront: A cease fire abroad, and friendly fire at home, both illustrates the risks of being within the orbit of President Trump. Friendships are transactional, subject to "You're Fired" at any moment as the Kurds in Northern Syria are realizing. And sustained close relations can lead to self-inflicted harm as Chief of Staff Mulvaney
Read More 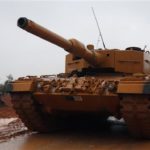 TLDRUpFront: In the last forty-eight hours three cities have officially changed hands in three different countries on opposite sides of the planet. The fall of Ar-Raqqah in Syria, liberation of Marawi in the Philippines and seizure of Kirkuk in Iraq are a Dickens menagerie representing the ghosts of ISIS past, ISIS present and post-ISIS future
Read More
TLDR Upfront: The encirclement of Aleppo by pro-Assad forces has been broken by an unheard of coordinated assault by two rebel coalitions. In response, Iran has sent elite paramilitary units from Iraq and Lebanon into the breach while Russia conducts a sustained air campaign on rebel positions. Once again an “all-in” four-way conflict between five
Read More
TLDR Up Front: The Syrian government remains holding the most gains in the Aleppo battle, but a counter-offensive by the Al-Nusrah front aims to undermine those gains southwest of the city, while ISIS continues to try and contain the Syrian government's advance east of Aleppo to Kuweyenes air force base.
Read More
TLDR Up Front: Although Aleppo has been the Sarajevo of Syria since 2012, it's forming into just such a battle as no less than six distinctly separate major forces converge onto the city from all sides. This is creating a "swirling" effect visible on the map as each group takes, loses and retakes ground. Except
Read More