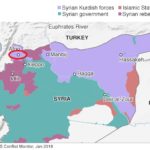 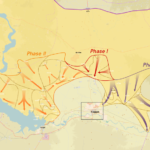 TLDR Up Front: Pressed on two fronts in north central Syria there is evidence ISIS is relocating its capital from Raqqa to Deir ez-Zor. Local Kurdish Syrian forces have been battling to encircle Raqqa for months; while a mix of Turkish, Syrian rebel, and Kurdish Syrian forces have battled ISIS – and sometimes each
Read More
TLDR Up Front:Pro-Assad forces are in the final stages of securing the last territory in Aleppo, ending the Battle of Five Armies in a major immediate victory for Assad - though the future is uncertain.
Read More
TLDR Up Front: Although Aleppo has been the Sarajevo of Syria since 2012, it's forming into just such a battle as no less than six distinctly separate major forces converge onto the city from all sides. This is creating a "swirling" effect visible on the map as each group takes, loses and retakes ground. Except
Read More
TLDR Up Front: Volunteers on wikipedia's conflict sites work in anonymity to produce some of the most detailed, up to date and clearly labeled maps available on the conflicts in Syria and Iraq. You just have to trust wikipedia.
Read More